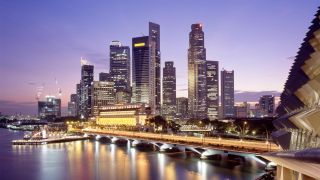 The recent flood of wearables is a step towards a smarter world, but smartwatches only measure you and they're not that small or smart yet. The Internet of Things is a lot smaller and smarter.

The Internet of Things (IoT) is made from thousands of tiny sensors that will measure everything from temperature and humidity to how far a wall has moved in an earthquake. It can tell whether a dose of vaccine has ever exceeded the recommended temperature and therefore if it is still viable.

It can measure the performance of individual components in a jet, and tell you if luggage, children, pets and even seals are where they're supposed to be. In short, it has a lot more applications than a smartwatch.

It's called the Internet of Things because it's (mostly) things that you attach the sensors to. But what really matters is these sensors can tell you vital information. In Japan, NTT DoCoMo is putting temperature sensors on pregnant cows; when the temperature changes, it tells the farmer which cow is about to deliver.

He can then check the cow and call the vet earlier if there's a problem affecting the calf. Usually the farmers lose one calf in 10 to complications; with the sensors it's down to one in a hundred.

Some of the biggest projects (and the ones that are most likely to affect you) are smart cities. That means anything from managing streetlights to a system that measures traffic and car parking spaces, adjusts prices in a car park and directs you to that deal.

In the long run, a truly smart city will interconnect those systems and offer lots of ways for you to interact with them. But many of the first projects will either be adding smarts to a city's current systems or connecting together systems that a city is monitoring and managing separately.

That's what the £24 million Glasgow smart city project is mostly about. The plan will put sensors on streetlights and traffic lights and integrate them with CCTV so you know when the bulbs need changing. They will also let you know when the streets are empty so you can save money by turning the lights down or off, without creating dark streets that making people feel unsafe. Fit LED bulbs and turn them down by 30% and you can save a lot of money without people noticing any difference in lighting.

Some US cities already analyze the sound from traffic cameras to listen for car accidents and speeding cars, so they can call the emergency services automatically (and tag the footage that might be useful to look at). But what more can you do when you connect up the information from lighting, parking, transport and all these other systems? That's the real promise of smart cities.

In Los Angeles, almost a third of the traffic turns out to be people driving around looking for a parking space. It's not just that there aren't enough spaces to park; it's getting people to park at the meters that are empty. Lowering the prices on the less popular meters helps, something LA found out when it tried making the quarter of spaces people park in most more expensive and dropping the price everywhere else to $1 for two hours. But you have to tell people where they are. The long-term plan is a smartphone app that suggests cheap parking near where you want to go, or tells you when it's faster and cheaper to park at the station and take the next bus or train.

You can also save a lot of money by putting your heating, air conditioning and other building systems together (think Nest on a grand scale). Microsoft has 145 buildings and 58,000 people on its Redmond campus and at the height of the summer it uses 3% of all the power in the area. So it's no wonder it's keen to save some of its annual $62 million utility bill by making the buildings smarter.