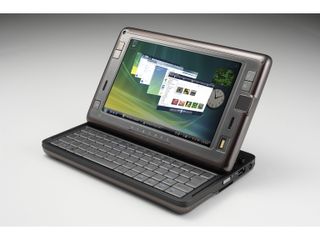 HTC’s Shift first saw the light of day last year. But we've not had much time up close with one. The HTC Shift might be a sub-sub-sub-notebook, but isn’t strictly an Ultra Mobile PC (UMPC) – that was the first thing made clear to us by Paul Ghent, HTC’s European executive director.

“This is pretty much a new segment," Ghent says. "Most people are referring to this as a UMPC. We’re not. It’s different in a couple of fundamental ways.”

A Shift in perspective

“We’re calling [the HTC Shift] the world’s first truly mobile computer,” explains Ghent. “There’s nothing else you can do this with.” OQO might have had something to say about that... The Shift runs full Windows Vista Business (featuring the touch-screen Origami user interface) and can be used either as a tablet-style device or with the neat fold-out keyboard.

The keyboard slides out from under the device and then tilts into place - it's reminiscent of Psion's old (but lovely) Series 7 portable. We had a bit of difficulty with the mechanism, which didn’t seem to want to work for us. It seemed a little stiff, although that's hardly surprising on a brand new product. But once you get the hang of it, the experience is somewhat different.

“[SnapView] is about messaging,” says Ghent, explaining that the application enables you to check your emails and text messages instantly, without fully switching the Shift on. “You could literally slip it out at the airport, check and reply.” You can also check your calendar and contacts.

Ghent says the Shift’s spec – not least the 40GB hard drive - means its “positioned alongside notebooks”. It also supports HSDPA, Bluetooth and Wi-Fi. It’s a truly attractive piece of kit and comes in a leather wallet. If you’ve got 1,199 euros (£890), it’ll prove ideal for a complete user experience without having to cart a full-size laptop around.

The main disadvantage is the compressed size of its keyboard. But if you want a sub-notebook-style device with full Windows functionality you’ll have to compromise somewhere.