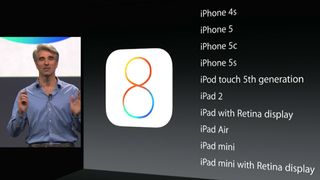 When iOS 8 launched users everywhere complained of what a buggy mess it was, and Apple apparently is hoping not to repeat that mistake.

That may seem obvious, but this rumor is more specific than vague: Apple is focusing all its efforts on making sure iOS 9 is stable rather than adding major new features, reports 9to5Mac.

The sites compares it to 2009's OS X Snow Leopard update, which at the time focused successfully on stabilizing Apple's desktop and laptop platform.

The last two iOS versions added a ton of new UI elements and features, from Apple Pay to the control center, but Apple isn't blind to the toll that's taken on the operating system, the site's sources said.

As a result, iOS 9 will have a "huge" focus on bug fixes, stability improvements and performance boosts, they said, while Apple also tries to keep its size in GB down.

The new iOS will still have some new features, but stability and performance will reportedly be the main selling points. And there probably aren't many Apple fans who will be too upset about that.