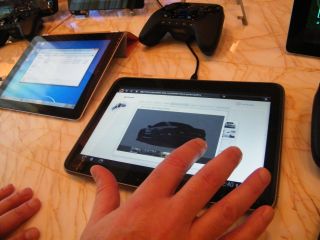 OnLive Desktop Plus brings Flash-enabled IE9 to the iPad

OnLive has added a subscription tier to its OnLive Deskop application for the Apple iPad, which now adds Internet Explorer 9 and access to the company's super-fast cloud internet service.

The OnLive Desktop app first launched in January offering remote access to a full version of Windows 7 (including the in-demand Microsoft Office) through the company's servers.

The new $5-a-month OnLive Desktop Plus service now brings Internet Explorer 9 functionality, which allows users to access the flash videos and websites that will not play on Apple's Safari browser.

However, there's more to this than just another Flash-enabled web browser.

Gigabit internet on your iPad

A subscription will give users priority access to OnLive's cloud-enhanced web speeds of up to a gigabit. Early tests have revealed download speeds of 650Mbps and upload speeds of 200Mbps.

It works by channeling your connection through OnLive's mightily impressive servers based in the cloud.

That means, regardless of how fast or slow, your home Wi-Fi connection is, OnLive Desktop Plus' cloud-accelerated connection will dramatically enhance page-loading and streaming speeds.

Nothing short of breathtaking

"Experiencing a full Flash-enabled Web experience at gigabit speeds on iPad is nothing short of breathtaking, and OnLive Desktop Plus is your ticket to ride," said Steve Perlman, OnLive Founder and CEO.

"Combine that with OnLive Desktop's full-featured Microsoft Office and Adobe Reader PC applications and not only do you have the world's fastest mobile browser, but the world's most powerful productivity tools literally at your fingertips."

The company says a launch for UK users is coming soon, as well as versions for Windows, Mac and Android in the not-too-distant future.