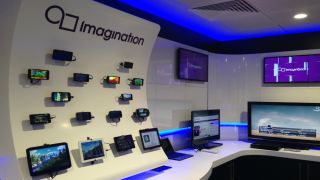 We swung by Imagination Technology's booth to check out the company's latest announcements. It has introduced two new GPU parts, the PowerVR 6XT and the 6XE.

The first is geared towards performance with clock speeds of up to 600MHz while the latter is optimised for power saving.

The 6XT delivers console-like quality (at least compared to the previous generation) according to a spokesperson for the British company.

He also added that the transition from Series 5 to Series 6 is likely to be swift as an increasing number of hardware partners have already licensed the solution and look to roll it out first in high end devices and then across their entire portfolios.

The next version of PowerVR however will go even further and will integrate raytracing, a property that will allow users to benefit from even more life-like renderings in games and other computer-generated images.

Uses of raytracing however go beyond gaming with user interfaces and augmented reality likely to benefit from this leap in picture quality.

Imagination Technologies also demoed a new hardware solution that allows 4K encode and decode and will be available for Series 5 and 6.

An update on MIPS

As for MIPS, the processor company purchased by Imagination last year, our interlocutor mentioned some of the challenges met.

Imagination has more than double the headcount of its processor business and promises to deliver a faster product cycle starting with the successor to Warrior.