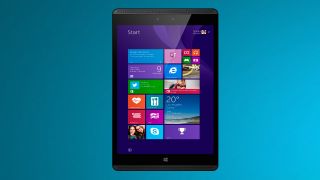 The metal tablet packs a 2,048 x 1,536 resolution display into its 8-inch (207mm) by 5.39-inch (137mm) frame. HP says the tablet can remained charged for up to eight hours. Although business users don't necessary require high resolution cameras, the 608 packs a decent 8 megapixel rear-facing camera and a 2 megapixel front-facing lens.

The Pro Tablet 608 is one of the many new devices on the market to support a reversible USB-C port, which Apple introduced to the world with its recently-released MacBook. HP is hoping you'll use this two-way connector with its optional smartpen, travel keyboards and portable dock accessories.

Speaking of accessories, HP has also unveiled a compatible HP Pro Tablet Mobile Retail Solution, which serves as a tablet case as well as a mobile payment terminal that accepts third-party apps like EMV, NFC, MSR and digital wallets like Apple and Google Pay.

The slate is powered by an Intel Core Atom Quad Core Z8500 processor with up to 4GB of RAM and 128GB of eMMc storage. Similar configurations can be found on tablets like the Lenovo ThinkPad 10. This is a solid chip, with solid RAM, but it's a step below the Intel Atom x7 Z8700 found on the much larger Microsoft Surface 3.

The Windows 8.1 version of the 608 will be available in mid-July for $479 in the US. HP will launch the Windows 10 version in late August. If you purchase the tablet with Windows 8 installed, you can upgrade to version 10 for free. However, if you wait until after the Windows 10 launch on July 29, a Windows 10 installed model will bump the price to more than the original $479, HP said.