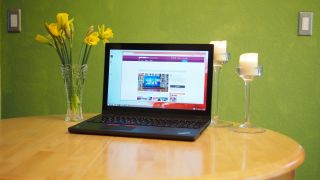 Touchscreen laptops with Full-HD displays are about to get thinner and lighter thanks to a new type of display tech from LG.

Instead of adding an extra touch panel on top of the LCD to provide touch functionality, LG's Advanced In-Cell Touch (AIT) panels embed a touch sensor within the LCD panel itself.

This shaves 1mm (or 25%) off the panel's thickness and reduces its weight by 200 grams (around 35%) compared to a conventional 15.5-inch touch-embedded full-HD panel.

LG reckons that it also makes for a brighter and clearer picture due to the removal of the glass panel, while making touch super-responsive - even when wet.

AIT-based panels have been used on smartphones such as the LG G4, but it's the first time the tech has made its way to larger devices such as laptops.

In a statement, LG said that it has agreed to supply 14- and 15.6-inch AIT panels to several PC makers and is in talks to supply other panel sizes. It revealed no plans to manufacture them for devices with higher-resolution displays than 1080p.

However, the company is looking to make AIT-based panels for 2-in-1 hybrids and touchscreen laptops that have pen functionality - such as the Surface Pro 3 and Asus T300 Chi.

LG is readying its new panels for the second half of the year, which is set to usher in a new generation of touch-optimized laptops running Windows 10.