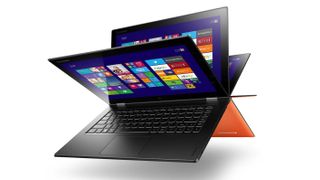 The Yoga 2 Pro has a high resolution touchscreen

Laptop. Tablet. Tent. Stand. That's always been the four-mode mantra of the Lenovo Yoga and Lenovo has announced a new generation model at IFA 2013 – the 13.3-inch Yoga 2 Pro.

Aimed at the business market and featuring Windows 8 Pro, the new model stuns with a whopping QuadHD+ 3,200 x 1,800 resolution touchscreen.

Compare that to the old model, with its 1,600 x 900 resolution. The new version is also slightly thinner than the old version, at 1.5mm instead of 17.1mm. As you might expect, there's also a bit of weight removed so it's now 1.4Kg. Considering that most non-flip Ultrabooks are hitting that weight, this is very impressive. Check out our review of the original ThinkPad Yoga and the smaller Yoga 11S.

Gesture support and voice control also feature in the Yoga 2 Pro. There are also Haswell-generation Intel Core processors up to Core i7 plus up to a 9 hour battery life and Intel Wireless display.

The new ThinkPad Yoga price is 1299 Euros and the Yoga 2 Pro release date is October. The 11S also gets an update with new processors, although availability on that is currently unclear.