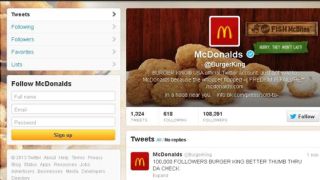 Burger King gets an unwelcome McHack

Fast food chain Burger King shut down its Twitter account on Monday after hackers broke in and claimed the company had been sold to rival McDonalds.

The official account showed McDonalds' golden arches as the profile picture, changed the cover photo to McDonalds food, and switched the account name to reflect the 'sale' to the Big Mac purveyor.

In the biography page, the hackers mocked BK saying it had been "sold to McDonalds after the whopper flopped" and changed to location to "in a hood near you."

Ironically, after the attack, @BurgerKing's Twitter following rose from a rather measly 83,000 followers, up to 108,000.

The account is now listed as suspended, presumably while BK tries to undo the damage. However, there's no undoing the embarrassment this will have caused the company.

While the account was still live, the hacking collective Anonymous appeared to claim responsibility for the attack, citing #OpMadCow. Whatever that is.