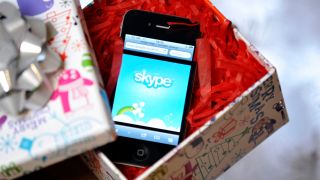 It's into double figures now

Happy birthday to Skype. The video-calling service was introduced to the public 10 years ago today, and 127 years after Alexander Graham Bell first patented the telephone.

Skype's impact was huge, not only on how we communicate but also our expectations around how, where and how often we do it.

In April, Skype announced that its users are now clocking up more than 2 billion minutes connecting per day. That's enough time to travel to the moon and back more than 225 times.

It's unlikely that the company's Estonian developers would have dreamed of such success back in August 2003. It was a time when dial-up was the king of connectivity and internet communication was a fractured affair dominated by instant messaging clients such as ICQ and MSN Messenger, the spiritual forerunner of Windows Live Messenger that Skype replaced earlier this year.

Perhaps Skype's success can be put down to its focus on sharing, whether it's making an intimate one-to-one moment on a video call, suggesting ideas to a room full of participants in conference chat, or transferring instant messages and files. For a service whose foundations can be found in Kazaa, an early 2000s peer-to-peer service that rubbed shoulders with Napster, Limewire and others, it's perhaps unsurprising that sharing is such an integral part of its DNA.

Today, Skype's influence is everywhere. Whether it's Apple's Facetime service or one of the many smartphone apps offering experimental new ways of video calling, most, if not all newcomers are only too aware of the standards set by the looming blue cloud in the sky.

Skype started off as a VoIP (voice-over-IP) program installed on a PC that let you talk to any other user on the service with a microphone or webcam. The limitations of dial-up internet meant that early transmissions weren't perfect, but the service made up for it by letting people make cheap calls to land lines and mobile phones, and monthly plans were introduced to let people do more for less.

Since then it's evolved to add features such as interactive whiteboard sharing, group calling, texting, joint navigation of maps, and file sharing, in addition to social elements, such as Facebook integration.

In many ways, its usefulness has been limited only by its users' imaginations. Musicians have used it to jam along with each other and trade songwriting ideas, and it's proved its chops as a teaching tool through Skype's own 'Skype in the classroom' website that lets people hold virtual classes for online students to attend.

Skype is set to branch out to console gaming when it becomes the driver behind the forthcoming Xbox One's integrated voice, video and social features following Microsoft's $8.2 billion acquisition of the company in 2011. PC gamers have already been using Skype, which has long fought a fierce battle with rival communication program Ventrillo, since its introduction 10 years ago.

Of course, Skype has also proved valuable is in the corporate world, providing a viable alternative to expensive video-conferencing suites and allowing companies to make free calls to potential customers, partners and other businesses.

The service has also added new business functionality over the years, such call forwarding and automatic video recording for the surveillance of business premises. It can even double up as a customer service tool through the addition of a website button that can be embedded to let customers know when a business representative is online.

And last year, Skype introduced a new website, named Skype in the Workspace, to give small businesses a platform to promote their products and services.

With an emphasis on nurturing new features and challenging existing approaches to communication, it's unsurprising to discover that Skype is posing an ever growing threat to telcos' business models over time, though this has subsided as demand for bandwidth requirements grow in the face of heightened demand for higher-quality video and voice streaming capabilities.

The question is: where will Skype be in 10 years' time? The pace of change means that it's hard to say for sure, but you can be certain that our thirst for increasingly complex communication tools will take the service in ever more interesting and practical directions.