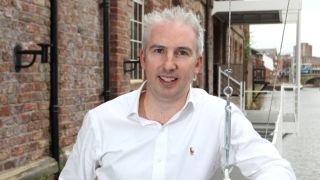 Ian Stone is MD UK and Ireland of Anaplan

Although it is difficult to pin down just one factor that makes cloud computing such a game-changer for businesses, perhaps the key benefit rests in its ability to 'level the playing field'. By removing much of the initial upfront costs, the cloud allows small and medium businesses to compete with their larger rivals – and in some instances, to surpass them!

But large businesses shouldn't feel restricted by legacy systems. The ability to use the cloud to identify new opportunities and efficiencies isn't just for the new kids on the block – the key is determining exactly where cloud can deliver the greatest value.

For me, there are three qualities the cloud brings to IT. The first is scale – the ability to handle almost limitless volumes of data in milliseconds. Second is ubiquity, as cloud solutions are available anywhere, on any device. The third is user-centricity, as the technology should be easy for all employees to get to grips with.

The cloud for all

With less infrastructure and fewer internal processes, startups and SMEs have always been considerably more flexible and agile than their market-leading competitors. In contrast, larger enterprises retained their dominance by relying on infrastructure, scale, access to multiple markets and superior technology. The arrival of cloud computing has eroded these advantages, so it's no surprise that large companies are beginning to become concerned.

Built on systems that have seen long-term investment, large enterprises are not often in a position to 'rip and replace' their underlying infrastructure. However, they can instead look at solutions which sit on top of existing systems.

For example, there has been much talk of big data and the opportunities to be had from crunching large volumes of it to react faster to changes in the market. This is a perfect challenge for cloud software. With its infinite computing power, businesses can tackle large volumes of data held within legacy systems and, as the cloud is ubiquitous, it should be easy to compare the data held in systems with data and insights from staff on the ground.

This capacity empowers end users, allows businesses to recognise market changes and respond to them quickly, all within a secure and reliable cloud model.

Building for the future

Taylor Wimpey, one of the UK's largest construction companies, is a great example of a leading UK business doing just this. The company threw out its old forecasting processes (a sprawling set of Excel spreadsheets which was running forecasts for 24 UK offices) in favour of a new cloud-based system which could be tightly integrated with its legacy infrastructure.

By taking data from this new system, the business can now make decisions quicker and easier than ever before, removing the many hours of effort that had previously gone into distributing, managing and consolidating spreadsheets. With everyone working from the same central data, the reliability and trust in the figures drawn from it has also increased dramatically.

Additionally, EAT, the award-winning high-street chain, has moved to a cloud reporting model for more than 100 of its UK outlets. With plans to double the size of the business over the next three years, EAT wanted a way to expand its organisation – but without needing to expand the finance function alongside it. To match these ambitious growth plans EAT needed a scalable solution. Cloud-delivered software was the obvious choice – ensuring that the business achieved the level of flexibility required to ensure it would not end up outgrowing its system.

Previously using three separate planning processes – long-term planning, company level planning, and store planning – EAT has used the cloud to streamline the system into a single operation. The integration not only reduces the risk of errors but means that decision-makers can have real-time information at hand when planning for the future or reacting to the latest market condition.

What's interesting in both of these cases is that while responsibility for the application remained with the IT department, its day-to-day usage came from users across the business. Overall, Taylor Wimpey's process of generating a forecast was cut from eight weeks to mere days and both organisations gained the ability to check forecasts based on the market conditions of that day.

Business decisions were able to be made quicker and, thanks to now having access to real-time information, more strategically. The cloud has gifted both organisations the tools needed to not only spot new opportunities faster than their competitors, but to make the decisions needed to exploit those opportunities as well.

Cloud as the enabler

The cloud is certainly enabling a new wave of startups and entrepreneurs to compete in a competitive and often global market, but larger businesses are also getting a piece of the action.

When you consider the cloud's scalability, ubiquity and user-centricity, it's clear that cloud should be on the agenda in some way for businesses of any size. The key factor is that reaping the benefits doesn't have to mark a complete overhaul of IT systems; it's just a case of applying the cloud where it works for you.