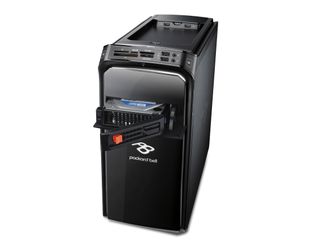 Packard Bell's new Ixtreme has a device doc on top

Packard Bell has unveiled details of its latest desktop PC, a refresh of its Ixtreme model.

Pushing the tower's "high-end glowing cuves", Packard Bell claims that the new Ixtreme makes "the overall computing experience more convenient and the most intuitive ever."

Hefty claims from a company that's no stranger to making outlandish statements, we'll be interested to see the hardware back them up.

And now, the actual features

The desktop PC comes with the full version of Adobe Photoshop Elements 8 installed and has a handy "device deck" on top of the tower; handy as long as you weren't hoping to slot the hardware into a specific, low-ceilinged shelf-space.

Processing-wise, we're looking at a second gen Intel Core affair, with Intel Turbo Boost 2.0 Technology and the latest processors from AMD to boot.

Of course, no product is complete without getting in on the 3D action, and the ixtreme is no exception, thanks to its NVIDIA GeForce GT400 series graphics card for out-of-screen 3D effects. There's also an HDMI port for linking the PC up to your bigger-screened TV.

Other movie benefits include a DVD player/burner included and the option to upgrade to a Blu-ray drive too.

If all this has piqued your interest, you'll be able to pick up a Packard Bell ixtreme after its UK release date of February 2011, with UK pricing set to be around £699.