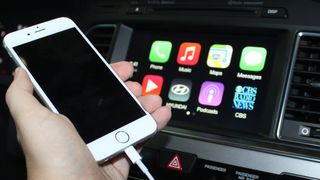 Lost in yesterday's excitement over the Apple Watch and a new MacBook was Apple's intention to create electric cars. Recently the conversation surrounding the possibilities of Apple a smart car has become less about "if" and more about "when."

Fueling the speculation are recent articles by the likes of Wall Street Journal, which reports that Apple has several hundred employees working on an electric vehicle that is being concealed under the code-name "Titan," and resembles a minivan. Bloomberg has reported that Apple could start production of an electric car as soon as 2020, which seems awfully soon, until you consider that this is the world of technology we're talking about, which moves far faster that we can logically process. Just look at where we were five years ago with smartphones.

Apple has remained tightlipped on the matter, but even if it is working on a car, that doesn't mean it will actually go to production. It could also be working on something car-related, like an alternative to or improved version of its in-dash touchscreen system, CarPlay. But let's, for the sake of argument, say that it will launch a car in the not too distant future. What would it mean for on demand businesses like Uber and the overall "Uberification" of the world which, by 2020, likely will have exploded in growth?

There is reason to believe that Apple is entering the automotive market with a competitor in mind - that competitor is Tesla, the company that has proven that if the there's one thing Silicon Valley startups can't succeed in, automobiles aren't it. This is interesting because Apple doesn't usually invent something with rivalry in mind; or rather its products are not designed solely to go head to head with existing products by other companies. For Apple, it's usually the other way around. Similar to Uber, Apple revolutionizes and sets the bar for new standards. It inspires competition and disrupts the current order of affairs. Like the Walter White of premium brands, Apple is the one who knocks.

And yet, Tesla, with its Model S in particular, has created an impeccable machine that is wowing drivers and passengers around the globe. Consumer Reports has identified it as its "top-scoring" car and the "best car it has ever tested." That's some hefty praise and Apple is clearly paying attention.

Last month, Business Insider reported that it received an unsolicited email from an Apple employee saying that Tesla employees were "jumping ship" to work on Apple's new automotive initiative. The article also noted that according to LinkedIn, about 50 people currently employed at Apple had previously worked at Tesla, mostly as engineers. Undoubtedly, those 50 are among the "several hundred" WSJ has cited as working on the new car.

While Apple may want to make a car that could give Tesla's Model S "a run for its money" as a source tells Business Insider, it's not going to want to stop at that. Unless Apple is partnering directly with Tesla, the tech mammoth is going to want to squash Tesla by creating a trailblazing vehicle. This is where Apple's business model will come into play, as could Uber and other on-demand car services like Lyft and Sidecar.

Tesla may be a supreme product, but it's not a very popular one - at least, not in the states. This isn't just because it's expensive, it's because it's difficult to purchase in much of the country. Tesla sells its cars directly to consumers, a method that cuts out the middleman and allows customers to order online. It's an appealing sales model for today's tech-loving, dare we say Uber-minded consumer, who is all about transparency and getting what it wants without any unnecessary hassle or loaded fees. But manufacturer direct sales methods are banned in 26 states. While one can still order a car online and arrange for delivery, that's not a terribly appealing option for the average consumer.

And, who make up the majority of Uber's drivers? The average consumer. That's a big reason behind why Uber is so successful. Anyone with a relatively new car and a clean driving record can join its troops. If Apple is making a car like Tesla's, it would be smart to make it more affordable (by 2020, that should be doable), and also to sell it in a way that doesn't cross red tape. This would not only benefit Uber, which could then begin to offer it users the supreme Apple car experience, likely as one of its luxury options, it would benefit Apple by getting its products on the road. What's more, it would save the company from a lot of legal headaches.

"Tesla has been waging a state-by-state battle to sell directly to consumers, which dealerships say violates franchise laws," Joe Wiesenfelder, Executive Editor for Cars.com tells TechRadar. "Tesla gets away with it in some states, in part, because it's a relatively low-volume seller. If a company the size of Apple were to attempt the same, I suspect it would be in for a battle royale from dealership organizations, which are among the most politically powerful groups in the country."