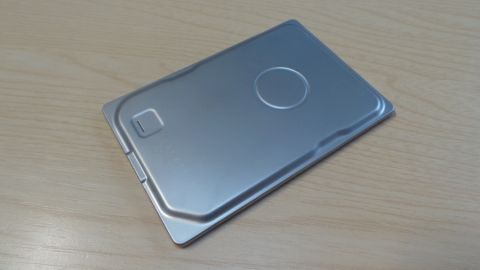 The Seagate Seven is a hard disk drive fit for a spy. It's svelte and beautiful but neither spacious nor blindingly fast. Surely someone will come up with an SSD model that's even thinner.

I wouldn't be surprised if Spectre, the next James Bond movie scheduled to be released later this year, features the Seagate Seven as one of the products "placed" in the film. Obviously, there's the number (Seven – 007) but also a nod to another legendary Bond movie.

The skin-like enclosure of the Seagate Seven reminds me of the fate of Goldfinger's secretary, Jill Masterson, who was murdered by being covered in gold after she betrayed her boss. The Seven doesn't get that costly treatment but the end product is still stunning.

This portable hard drive looks superb even in its stainless steel chassis. It is thin, the thinnest external hard disk drive ever launched at exactly 7mm, thinner than some internal hard drives and at 178 grams, lighter than most. Seagate managed to produce such an engineering feat by using a 5mm hard drive with a single 500GB platter. You won't be able to open the sealed enclosure as it is literally snapped close (probably using an industrial press).

But while the Seagate Seven (otherwise known as the STDZ500400) is undoubtedly a premium hard disk drive, it comes at an equally premium price, selling for £100 at Ebuyer. It doesn't sound a lot, but we're used to 2TB external 2.5-inch hard disk drives like the Toshiba Canvio that are priced under £80.

Sure, it is not as pretty or portable, but paying five times the price per GB is a prospect hard to fathom – it seems that being the thinnest around does come at a very hefty price indeed. Pricewise, it is almost more akin to a 500GB SSD (the Kingston V300's price currently hovers in the £130 to £140 range), which might not be thinner but would leave the Seagate drive in the dust when it comes to raw performance.

Also, while the metal chassis looks great, it comes with some issues – it is prone to fingerprints and scratches.

The Seagate Seven boasts just one blue LED status light and a flat USB 3.0 interface at one end. The hard drive was supplied with a single USB 3.0 braided cable which is probably the best looking cable we've seen in a while. Not that we're excited about cables often, but this one not only looks great, it is also bendable.

Seagate's Seven is formatted to the exFAT file system but its default application, Dashboard, is Windows-only. Like other similar software, it allows the user to back up entire drives or designated file types or folders, on a defined schedule. Note that it also asks you to register with Seagate which is not essential.

That said, at 500GB capacity you will very likely run out of space quicker than you might hope. Another interesting feature is the fact that you can back up your Android or iOS devices as well as media from Flickr or Facebook (but not Twitter, Instagram, Tumblr, Pinterest and the flurry of others).

The drive achieved 113MBps/51MBps in sequential read and write respectively on CrystalDiskMark. Similarly, the Seagate Seven achieved a respectable score of 1954 on PCMark 8, not bad for a 5400RPM hard disk drive. All three results are very decent figures and surprising given that it is a single platter model.

That said, the scores are nothing to shout about and similarly priced hard drives like the HGST Touro Pro (which is thicker but also features a 7200RPM hard drive) are far faster and more capacious.