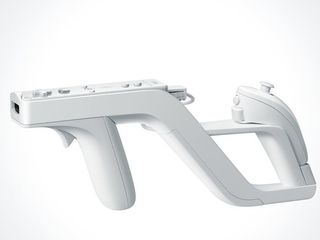 Nintendo is keen to defend its Wii controller patents

Car owners are likely to be puzzled by the latest addition to the bristling array of gadgetry in our vehicles – airbags on the outside.

The idea comes from a branch of Toyota in Japan, which has developed a system of sensors that can work out if the car is about to hit someone and then deploys airbags at the front of the car and atop the bonnet.

Aside from the obvious impact softening, the bags also deflate right after the hit to stop unfortunate pedestrians being flung into the road like pinballs. Unfortunately, any commercial deployment is likely to add several hundred pounds to the cost of a car.

Moving on to an equally sensible suggestion that is far more likely to be widely adopted, we have news that Westinghouse, a large US electronics builder, has committed to using a universal power adapter for electronic products.

The company will start using Green Plug early next year, promising a kind of charging hub for multiple gadgets that currently require their own adapters, each incompatible with the other.

Sales of phones, digital cameras and other gadgets are expected to push the number of old-style adapters shipped this year to over three billion, so the potential for reducing the environmental impact is clear.

On the gaming front, US firm Nyko Technologies is in Nintendo’s bad books to such an extent that it is being sued for patent infringement over its Wii nunchuk controller replacement.

Nyko’s Kama Nunchuk is a wireless version of the Nintendo original, something the Japanese giant is less than pleased about. The fact that the American version is far better than Nintendo’s is neither here nor there, of course.

Finally, what do you think was the most talked-about news item on Digg last week? No, not Samsung’s new Omnia phone – instead, the biggest headline grabber was Apple’s iPhone 3G launch.

The new handset attracted almost 3,000 stories, of which about 50 hit the internet paydirt that is the Digg front page. So, desperate news websites looking for clicks know what they need to cover. Oh, wait…

That’s it for now, but stay tuned to TechRadar for the rest of the day’s news as it breaks or grab a feed here - get it while it’s hot.