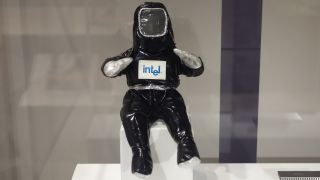 No word on whether the Intel man is among the 5,000

Intel plans to reduce its global workforce by around 5,000 in 2014 as the chipmaker, struggling with falling PC sales, shifts focus to faster-growing areas.

The confirmed the job cuts the day after it reported that its profit and revenue had fallen for the second consecutive year. Intel intends to jettison the jobs without laying off workers; the reduction with be done through attrition, buyouts and early retirement offers.

Intel dominates the PC chip industry, but it has been slow to adapt its processors for smartphones and tablets, markets now dominated by rivals such as Qualcomm and Samsung. On top of that, worldwide PC sales have dropped from the previous year in seven consecutive quarters, an unprecedented decline.

Intel has both added and shed significant numbers of jobs over the past decade. Struggling to fend off a challenge by smaller rival Advanced Micro Devices in 2006, Intel announced it would reduce its workforce by over 10 000 positions, but its overall number of employees has grown since then.

Intel isn't the only company hit by the declining market for traditional PCs. Earlier this month HP announced that it would be eliminating 5,000 jobs in 2014, bringing its multi-year restructuring plan up to a total of 34,000 layoffs.