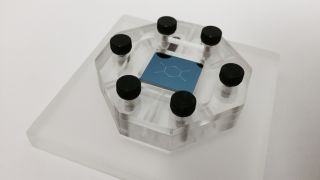 IBM has announced a breakthrough which could help with the early detection of cancer or other diseases such as the Zika virus, picking up on their presence even before any symptoms have manifested.

So, you've heard of a system-on-a-chip? Well, IBM calls its new technology a lab-on-a-chip (pictured above), and it allows for the separation of bioparticles down to a size of 20nm diameter, far smaller – around 50 times smaller in fact – than ever achieved before.

As IBM notes, such a small scale means that particles such as DNA, exosomes and viruses can be separated in order to be analysed, allowing for diseases or problems to be detected before any outward signs are visible. And that obviously gives the patient a far better chance of recovery thanks to early treatment.

The company notes that it's developing this technology in conjunction with the Icahn School of Medicine in New York, and the first step in trialling will be to test it detecting prostate cancer in the US.

The plan is that this should confirm that the lab-on-a-chip can successfully analyse liquid biopsies from patients and is capable of detecting exosomes with cancer-specific biomarkers. Exosomes, by the way, are vesicles – a small structure within a cell – which are present in bodily fluids such as saliva and urine, and they're being seen as increasingly important in the diagnosis of malignant tumours.

And this technology is heading towards a world in which a simple home diagnostic chip could allow people to regularly monitor their health via urine samples, much like a home pregnancy test – except this test will potentially reveal early-stage cancer or viruses and suchlike.

Gustavo Stolovitzky, Program Director of Translational Systems Biology and Nanobiotechnology at IBM Research, commented: "The ability to sort and enrich biomarkers at the nanoscale in chip-based technologies opens the door to understanding diseases such as cancer as well as viruses like the flu or Zika. Our lab-on-a-chip device could offer a simple, noninvasive and affordable option to potentially detect and monitor a disease even at its earliest stages, long before physical symptoms manifest."

He added: "This extra amount of time allows physicians to make more informed decisions and when the prognosis for treatment options is most positive."