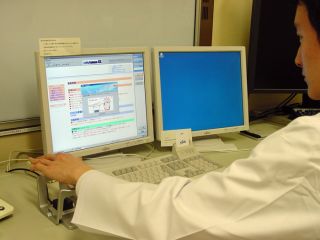 PalmSecure uses veins in the hand to unlock private records.

The security of personal data is a huge issue in most of the developed world, particularly so in Japan where regular high-profile data leaks combine with an innate conservativeness to create a climate of suspicion when computers are involved in anything sensitive.

As medical records are among the most private items, Japan's rapidly aging population will be pleased to hear of Fujitsu 's biometric computer security system that relies on the uniqueness of the vein patterns in an individual's palm.

The PalmSecure biometric palm vein authentication system went into operation this week at the Hospital for Charged Particle Therapy at the National Institute of Radiological Sciences (NIRS) near Tokyo.

The NIRS hospital specialises in nuclear medicine and care for patients who were exposed to atomic bombs - a unique and understandably delicate issue in Japan.

Medics seeking access to a patient's medical file are all issued with a smartcard containing an IC chip that holds a scan of their palm-vein pattern. Unlocking the networked records terminal is a simple matter of inserting the card and placing a hand on the palm scanner.

Fujitsu claims high reliability for the system - a false acceptance rate of less than 0.00008 per cent and a false rejection rate of 0.01 per cent - and that the complexity of palm veins makes them almost impossible to forge. Unsurprisingly then, the palm readers are already a common sight on Japanese ATMs.

As a side note, security that tight should please both patients and old-school bureaucrats similar to the one who once threatened to reject my own business licence application until I purchased a brass padlock to keep client contact data secure. Apparently, the 128-bit encrypted computer storage I had been using was a little much for him to grasp.