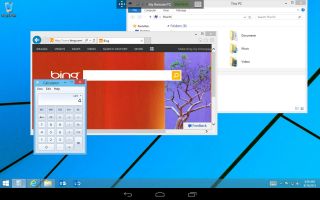 The new version of Windows Server is designed to make BYOD less painful for businesses. That's not just about managing devices, though you can do that. From the servers you buy to how you put your IT together, R2 is trying to make it easier to give users what they want, so they don't start going around you.

Every conversation with Windows Server customers ends up being about devices at some point, says Microsoft's Mike Schutz, General Manager, Server and Tools. "If it's not BYOD, because there are still some companies that don't believe in BYOD, there's no doubt that they have more types of devices entering their workforce. Whether they buy them or the employee buys them, the mobility trends are only accelerating." That's why the R2 release has a range of features focused on BYOD, from remote access to authentication. "We have the new RDS [Remote Desktop] clients for iOS and Android and Mac, and the modern domain join - that's what workplace join is, it's domain join for unmanaged devices - and then extending that with Windows Intune."

So many new devices are showing up so often that the IT team wouldn't have time to set them up, even if that was what users wanted (and it's not); connecting has to be self service. "It's why MDM solutions become so important down the road, because it's so easy for me to get into a device that IT will never touch it. So I need to be able to enroll that device in my company, like with workplace join or with Intune so that I can get to the things I need to do. And I need to be able to do that in a self-service model, because that's how we're being trained; these new devices, nobody needs to come and set it up for me. I connect it, I hit next a few times. That's how we're used to getting software and that's how we're used to connecting devices. Things like Intune and workplace join that are using that same model mean that I choose to connect my device to work rather than it getting pushed to me."

But delivering what users need goes further into the way you run your infrastructure than just connection and configuration. R2 is also full of features like the Windows Azure Pack that make it practical to build services so you can compete with the cloud services business users are trying out without you. "What customers are finding is that they don't have to wire it all together themselves and it doesn't take so much effort to build a private cloud. The benefit of us bringing Windows Azure capabilities that we've tested in our data centres and making that available to them is very appealing."

Far ahead of VMware?

Schutz sees Windows Server as already far ahead of what VMware is promising for private cloud. "I was talking to one customer; they're a VMware shop and they had been working on trying to build a private cloud using VMware and they had to build a self-service portal, they had to wire everything together. It took them four to five months. This guy put Windows Server, System Centre and the Azure Pack on his servers and created a private cloud in a day or two - when they'd been working on this formal project for months, trying to turn their VMware virtualised infrastructure into a private cloud."

The plan is to make that even easier and faster. "We're going to get much more prescriptive and try to help customer get that more 'out of the box', so you could imagine us doing an unattended install of that whole system. And we want to help bring it together with reference architectures and hardware designs that embody the design point we have. We're working closely with HP, Dell and others to look at hardware reference architectures that leverage their innovations in networking or compute or storage or all three and bring those together in a way that makes sense and lights up in a Windows Azure Pack-like model. So they would look at lower cost storage options that leverage Storage Spaces that are file based using the SMB protocol, networking that supports NVGRE network virtualisation, in industry standard servers you buy a rack at a time."

Storage Spaces is proving more popular thanks to the addition of automatic SSD tiering in R2. "It was a question we got a lot with Windows Server 2012; it's great that you can pool disks, it's great that you can slice them up and allocate them as virtual disks, but unless you've got tiering it's only so interesting. Just buy more hard drives and let the algorithm take care of it." That speeds up any workload, including Exchange, and it gives you more options for SQL Server performance, Schutz points out.

That kind of automation frees up time you can use to set up workplace join and other self-service options, and get your information security right for BYOD, but it's all a different approach from traditional server management. Schutz says IT teams need to make that change in approach.

"We've been trying to educate sysadmins to think about their roles as an infrastructure provider. You have customers and tenants that you need to satisfy, so let them do self-service… The idea of them delegating access is sometimes foreign, but that's where we see a lot of customers coming to us - because they're tired of being gone around so now they're saying 'help me offer a viable alternative to the outside cloud'."