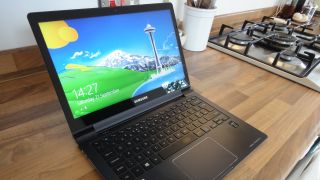 Do you own a Samsung PC? Then you shouldn't be upgrading to Microsoft's latest operating system on that machine – and this is advice direct from the company itself regarding installing Windows 10.

It's a pretty worrying situation when Samsung's tech support is advising against installing the OS due to potential issues this will cause with the company's laptops and computers, when Windows 10 has been out for almost a year now.

As The Register reports, one Samsung laptop owner (among a number who have reportedly experienced problems) whose Wi-Fi card didn't work with the new OS contacted the company for advice and was told by UK tech support: "Honestly speaking, we don't suggest installation of Windows 10 to any Samsung laptop or PC and we are still coordinating with Microsoft regarding to this matter. The Drivers that we have on our website are not yet compatible to the latest version of Windows."

The technical support rep went on to say the best course of action is to keep the current version of Windows, and Samsung will advise when issues with Windows 10 have finally been ironed out.

Of course, that's not much help to those who want to avail themselves of the free upgrade to Windows 10 – this expires at the end of next month, so folks need to upgrade before then or they'll end up paying for the OS.

On the other hand, people who don't want to upgrade and have been 'forced' into the move by Microsoft's controversial tactics pushing Windows 10 could end up with a non-functional notebook. Either way, nothing good is happening here.

Old drivers which haven't been updated for the new OS are certainly a major issue, with wireless cards appearing to be a persistent offender in this category. Samsung, of course, isn't the only vendor to be having problems in this department, either.

Update (June 2): Samsung has been in touch with clarification on the matter, and a spokesperson for the company said: "We apologise for any confusion caused by a recent incident where a customer service representative mistakenly provided incorrect information about Windows 10 upgrades for Samsung notebooks.

"We would like to remind our customers that they can visit the Samsung website where there is detailed information on the Windows 10 upgrade applicability for each Samsung notebook model run by Windows 7, Windows 8 and Windows 8.1."