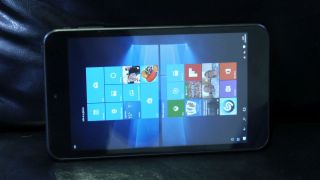 Over the past few months, I have been playing with Windows 10 in many flavours and builds. From 10049 to the current RTM one, which is 10512 (at the time of writing), from Windows for desktop to Windows on phones, and overall the journey has been a fairly easy one. Until now that is.

It may well be that I was unlucky with the hardware, as trying to install the OS on a popular, entry-level, Windows 8 tablet, the Linx 7, proved to be an ordeal to say the least.

To Microsoft's credit, they had always suggested that Windows 10 Technical Preview was not ready for tablets or indeed for touch but even upgrading to the final version of Windows 10 couldn't bring back touch for me.

A note of caution before proceeding: I strongly urge you NOT to carry out this test on any sort of expensive gear. I bricked a tablet trying to install Windows 10 and I shan't be liable for any accident that might happen to other people's hardware – you have been warned!

Pictured below is the actual setup I used:

A final note – you might want to catch up on my previous adventures: You don't need a crazy powerful PC to run Windows 10 - here's the proof; This is what I learned installing Windows 10 Mobile on a £25/$40 smartphone; and Want to install Windows 10? Check what I learnt first.