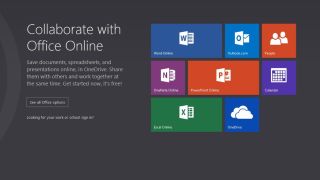 Microsoft has added a number of small features to its Office Online suite to benefit those that use the web-based version of the popular productivity service.

An online blog post outlined the new features that are primarily focused on reading and proofreading, but also cover the saving and opening of files thus further championing its OneDrive cloud storage service.

Reading View is now much improved with the edit, print, share and comments buttons now in view at all times and readers will see that two advanced tools in the shape of translation and downloading options have also been added here.

Word Online, meanwhile, has a new proofreading feature that allows you to highlight a section of text and view the word count for that specific part, whereas before you could only see the number of words for the entire document.

Save files in more locations

Saving and managing files is slightly more advanced thanks to Office Online now allowing you to save files to different locations in OneDrive as opposed to just the one, and you can also download files to an external storage device as either an Office file or PDF.

Read-only files can also be edited a lot more easily by adding them straight to your OneDrive using the button on the toolbar and then opening them to edit inside Office Online.

Office Online replaced Office Web Apps in February 2014 as the home for Microsoft's collection of free web apps and it has been slowly adding new features, such as Skype, since OWA as it was previously known was launched in 2009.