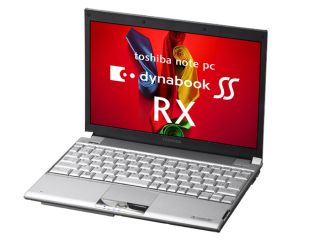 If you thought the MacBook Air was small, then check out the latest ultra-lightweight laptop from Toshiba Japan - the 768g Dynabook SS RX.

On sale from the end of January, the SS RX is actually a range of eight laptops with a bewildering variety of customisation options. Naturally, it's the lightest of the bunch that has drawn our beady eye.

The Windows XP-toting SS RX1 SE120E (scroll down for the specs) may not be a memorable name, but that 768g weight brings it in more than half a kilogramme lighter than Apple's latest attention seeker.

The two machines have the absence of an optical drive in common, while the Dynabook also has the choice of a 64GB solid-state drive or an 80GB hard drive for storage.

But look at the price

The Tosh wins on the expansion port front, with one FireWire and three USB 2.0 ports, a PC card slot and room for an SD card bay. There's even a fingerprint sensor and a modem.

Other hardware available in the base configuration includes a 12.1-inch WXGA screen, an Intel Core 2 Duo CPU at 1.20GHZ, wireless and wired LAN and 1GB of RAM. Battery life is rated at up to 13 hours.