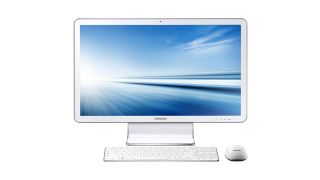 Samsung's large-screened ATIV One 7 all-in-one is getting a new edition just for 2014, featuring HD clarity and improved performance.

Samsung says it's appropriated the design aesthetics from their Galaxy line, and it shows. The 2014 edition is a glossy white with smooth edges and rounded surfaces. With that in mind, the One 7 2014 Edition is also designed to communicate with all Galaxy devices.

The major feature of the new model is its 24-inch full HD screen with 178 degree viewing angles and 10-point touch. The screen commands nearly all of the space on the display, and the anti-reflection display is also interchangeable, allowing a user to switch it from a work monitor to a HDTV.

Connect while powered down

Featuring Windows 8.1, the One 7 2014 is powered by a fourth generation Intel Core i3 or i5, with integrated graphics and storage of up to 1TB. The model also includes a 720p HD webcam. I/O ports are found at the back of the display and include two USB 3.0 ports, two USB 2.0 ports, HDMI in and out connectors and microphone port.

Enhancing its mobile connectivity, the One 7 2014 comes with Samsung Link and SideSync 2.0. Both programs are designed for interconnectivity between the PC and other devices, where the desktop can act as a cloud hub to store media. An interesting new feature is that users can connect to their One 7 2014 wirelessly through BT Music Play, even while the PC is powered off.

No word on availability or pricing just yet.