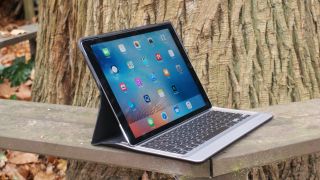 The choice between the iPad Pro and the Surface Pro 4 has the potential to represent a bit of a head-scratcher for those considering either for productivity. There's no denying the Surface line has arguably established itself as the go-to for a productive hybrid machine over the past couple of years.

However, this Fall, Apple seemingly inserted itself into the equation with the introduction of the gargantuan iPad Pro.

In our initial look at the Surface Pro 4 versus the iPad Pro, we noted that Apple's offering had the potential to usurp Microsoft's based mostly on its hardware design and specs. However, now that the Surface Pro 4 is out in the wild and we've had some time with each, let's take a second look to determine which company has created the king of the productivity hill.

On the surface (pun fully intended), the Surface Pro 4 clearly has the potential to outclass the iPad Pro in every facet. The big caveat here, however, is that specs are very much relative to what those innards are powering. In this case, when it comes to sheer power, it's like comparing apples to oranges (with Microsoft taking on a distinctly citrusy scent for the purposes of this idiom).

Since the Surface Pro 4 is powering a full desktop experience, it requires a bit more heft to take on more power-hungry tasks - and it doesn't disappoint. Microsoft's offering is infinitely more customizable, with processor options ranging from a relatively modest Core M3 to a full-fledged Core i7. The iPad Pro, on the other hand, is powered by Apple's new A9X processor as its only option, which is plenty speedy for iOS.

Similarly, the Surface Pro 4 offers a range of RAM options from 4GB at the low end to 16GB at the top end. For the iPad Pro, you're looking at 4GB of RAM and that's it. Of course, alongside the range of options with the Surface Pro 4 comes just as many price points, so you have to be pretty honest with yourself about what you're realistically going to do with the device before picking your configuration.

Where we can compare the two directly is in storage space and display tech. The iPad Pro sports exactly two configurations for storage size: 32GB and 128GB. These are sizes that we're typically used to seeing on smaller tablets and smartphones. This is probably just fine if you're planning to use the iPad Pro as a media consumption device with some light work on the side, but it would have been nice to see at least a 256GB option for those looking for a laptop replacement.

This isn't as much of a worry with the Surface Pro 4, which you can customize anywhere from 256GB to 1TB. However, you're also going to be shelling out much more on the top end, with the only 1TB option coming in at an astounding $2,700.

As far as displays are concerned, we found both to be crisp and excellent in our reviews. Both devices sport similar pixel density, with the Surface Pro 4's 12.3-inch 267 PPI display just barely edging out the iPad Pro's 12.9-inch 264 PPI screen. Aspect ratios are a notable departure, with the iPad Pro sporting a 4:3 ratio with a 2732x2048 resolution compared to the Surface's 3:2 ratio with a 2736x1824 resolution. Really, you can't go wrong with either display as far as clarity and usability are concerned.

One last thing worth pointing out is that the iPad Pro does offer an LTE option, whereas the Surface Pro 4 does not. If you're on the road a lot and need a constant connection to the internet, this glaring omission on Microsoft's part could be a deal breaker.