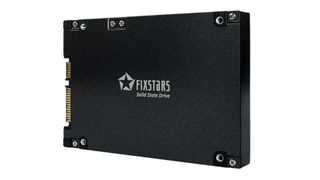 There was a time when one of the issues with SSDs was capacity, but that certainly isn't the case anymore – particularly not with the latest offering from Fixstars.

The new Fixstars SSD-13000M is a whopping 13TB 2.5-inch drive, making it the biggest SSD in the world at the time of writing. Fixstars has also launched a 10TB model alongside this one.

Along with the whopping capacity – to give some perspective, if you want to store 13TB on standard DVDs, you'll need around 2,800 discs! – both drives offer read speeds of up to 540MB/s and sequential writes of up to 520MB/s.

Satoshi Miki, CEO of Fixstars, commented: "The Fixstars SSD series has been highly regarded for their distinct reliability on steady read/write performance that lasts over time."

The SSD offers a temperature control system to minimise any risk of heat damage to the drive, and there's also an optional high durability mode which apparently triples the longevity of the drive – although with this on, storage capacity is halved (so you'll only have a mere 6.5TB).

Of course, this drive is priced out of the reach of the average user and is aimed at enterprises and for tasks such as heavy-duty video processing.

How much will it cost? A spokesman for Fixstars told PC World that the drive will run to an estimated (and eye-watering) $13,000 (around £9000, AU$19,000), with shipping expected to kick off by the close of next month over in the US.