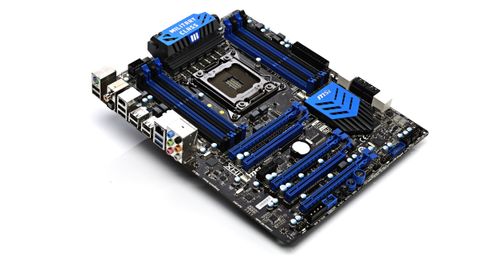 Sturdy build, excellent overclocking tools and dual BIOSes. Not the prettiest board, however.

Is there such as thing as too much system memory? In the context of the new MSI X79A-GD65 8D, that's the first question that leaps to mind.

As an X79 motherboard compatible with the latest Intel Core i7 processors for the LGA2011 socket, it forms part of the highest performing PC platform on planet Earth. But you still have to wonder whether support for 128GB of DDR3 memory split over eight DIMM slots is really rational.

Sure, for server PCs running multiple virtualised operating system and a whole hill of applications, that much memory is a boon.

But for desktop PCs, even those running heavy duty content creations apps, eight to sixteen gig is usually plenty.

In its fisticuffs with the Gigabyte X79-UD3 and Asus's P9X79 Pro, therefore, the MSI X79A-GD65 8D will need a few more tricks up its sleeve.

Maybe that old MSI favourite, the OC Genie button, can make the difference.