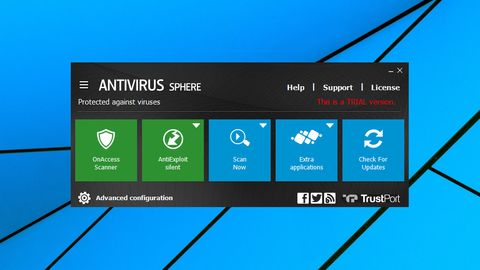 This TrustPort offering is cheap and easy to use, but some horribly dated features and a total lack of recent lab testing suggest you shouldn't rely on it as your only antivirus.

TrustPort is a Czech Republic-based company, founded in 1991, which offers a range of antivirus and network security software to home and business users.

As you'll guess from the name, TrustPort Antivirus Sphere is the company's baseline antivirus product. It's a stripped-back tool which concentrates very much on the fundamentals: signature and heuristics for detection, anti-exploits to protect browsers and frequently used applications, and a bootable rescue disk to remove stubborn threats.

This isn't quite as basic as it sounds. Antivirus Sphere includes two engines, for instance, both from respected developers: AVG and Bitdefender.

Bonus layers include the Application Inspector, a system and behavioral monitoring system which enables taking low-level control of what can run on your PC, and what really can't.

The price is relatively low at $25 (£19.49) for a one computer, one-year license. TrustPort offers excellent discounts if you add more computers, too, and a three computer license costs only $39 (£31.60). Renewals get a further 25% off, and overall TrustPort offers very good value to long-term users.

TrustPort has a 30-day trial build available on the website. It's a chunky 300MB, and has to download even more during installation from TrustPort's sluggish server, making for an unusually slow setup. But there's nothing for you to do, so leave your PC to it and it'll all be sorted when you get back.

Antivirus Sphere added five background processes to our test PC. That's more than usual, but they used a minimal 150MB RAM and few other system resources, and we didn't see any significant performance impact on our system during the review.

We checked TrustPort's folders and found files supporting the Bitdefender and AVG engines, as well as TrustPort's own. Some of the files weren't digitally signed, mostly from Bitdefender, and a few of them had surprisingly old copyright dates. This doesn't necessarily indicate any problems, but it does leave us a little concerned. If a 2019 antivirus includes a file which claims to be Bitdefender's Console Scanner, but it's unsigned and dated 2008, is that really giving you the best protection you can get?

There was better news when we checked TrustPort's self-defense capabilities. Security tools which use third-party engines sometimes fail to protect their files properly, leaving them open to malware attack, but that wasn't a problem here. We spent some time trying to delete files, stop services, edit Registry keys and more, but TrustPort brushed off our hacking efforts and system protection wasn't affected at any time.

TrustPort Antivirus Sphere's simplicity has one immediately obvious advantage: a very clear and straightforward interface. It's essentially a toolbar featuring just five large buttons, with only one of those – Scan Now – that you'll use on a regular basis.

The program supports six main scan types: Quick, All Disks, Local Disks, Removable Media, Registry and Scan Selected Target (whatever drive or folder you need). That's reasonable, but there's no way to set up custom scan types or to tweak scan settings beyond choosing a location.

You can also scan files or folders from File Explorer by right-clicking and selecting the Scan option. Unlike some of the competition, TrustPort handles simultaneous scans with ease: you can launch a full system scan, then scan multiple other files from Explorer, and have several Antivirus Sphere windows open simultaneously with their own individual progress reports.

Annoyingly, the trial displays a ‘running in Trial mode’ message before every scan, and you must click OK to clear it and continue. It's reasonable to display a warning when the program starts, or maybe once a day, but this level of nagging isn't something we'd expect from a professional developer.

Once they're running, the scans can be very thorough. Scan an executable from Explorer, for instance, and Antivirus Sphere doesn't check that file alone. It also examines memory and running processes, helping the program spot companion threats or anything else that might be shielding the target.

Quick scans seemed speedy, typically taking around a minute, but when we checked the details, this was mostly because they were checking very few files. Full and targeted scans took much longer, of course, but they were effective, spotting all our test threats and only raising a single false alarm (and even that was a minor 'potentially unwanted program' alert.)

Antivirus Sphere doesn't have any form of URL or browsing filter, unfortunately. This isn't necessarily a fatal error - downloads and any applications launched will be scanned, and known threats blocked at that point - but it does leave you more exposed to danger than usual.

The Extra Applications toolbar button tries to add a little more functionality by providing a couple of ways to build a bootable recovery environment. Sounded great, until we say what they were.

The first was via a plugin for the ancient BartPE, which was discontinued in 2016 after not being updated in years. We suspect the average antivirus user will never have heard of BartPE, and certainly won't want to use it here.

The second option was to prepare a Windows PE CD. That's slow and entirely useless if your computer doesn't have a CD, but there's an even more fundamental problem: it won't work at all unless you've installed the Windows Automated Installation Kit, a Windows deployment suite for developers which hasn't even existed under that name since the days of Windows 7.

Seeing some files with a copyright date of 2008 was beginning to make more sense, and there's a similar dusty and dated feel to other parts of the program. Clicking Help doesn't display a local help file, it just opens a web page to download a PDF manual. This wastes time talking about "what is a computer virus and what is not", and comes packed with very old security references.

Do readers really need to know that .286 and .386 files were drivers in Windows 3.x and earlier, for instance? How does it help modern-day users to explain that the term TSR meant 'terminate and stay resident', a method DOS program used to appear to close, when they were still active? TrustPort was founded in 1991, and it looks to us like the company has kept most of the documentation it's written over that time, rather than trying to keep it up-to-date.

Antivirus Sphere has one interesting extra in the Application Inspector, a whitelisting-type system which gives you a great deal of control over what runs on your system. The recommended setting monitors risky programs and doesn't allow them to change data in system locations until you give permission. Switch it to Secure Mode and only trusted and digitally signed files will be allowed to run. That level of protection can cause you some hassles and may break some software, but it will also help you block even brand-new and undiscovered threats.

TrustPort Antivirus Sphere breezed through our limited malware detection tests, but to get the full picture we also like to check reports from the main independent testing labs.

Unfortunately, TrustPort isn't assessed in most of the usual places. AV-Test doesn't cover the company at all, AV-Comparatives hasn't benchmarked it since 2011, and SE Labs has never looked at any of company's products, as far as we can see.

There was one notable success story from 2015, where VirusBulletin last assessed TrustPort Antivirus and praised its 'rock-solid stability and superb detection rates'. It's clear that the company has offered good levels of protection in the past, but such an old test doesn't tell us much about TrustPort's abilities today.

With no information from the testing labs, we decided to run one further check of our own. We've developed a custom ransomware simulator which works its way through a test folder tree, encrypting thousands of user documents, and exhibiting just about as much ransomware-like behavior as we could manage. Our hope is that an antivirus detects something is going on, hopefully kills the process, maybe recovers any lost files and warns us of the danger.

That was the hope, anyway. The reality was that Antivirus Sphere paid absolutely no attention to our simulator, effectively allowing it to trash more than 6,600 documents and media files.

While disappointing, this result should be interpreted with care. Passing our simulator test is a good indicator for an antivirus, but failing isn't necessarily a disaster. Our test app isn't real malware, and without knowing why it wasn't been picked up, we can't say what that means for threat handling in general.

Our guess would be that although Antivirus Sphere has a couple of solid engines from AVG and Bitdefender, the package is much better at detecting known malware than using behavior monitoring to pick up undiscovered threats. We could be wrong, but if TrustPort wants to prove that, the company needs to submit its products for independent testing, so potential customers can see how it compares to the best of the competition.

TrustPort Antivirus Sphere's Bitdefender and AVG engines help it detect known threats, and the multi-user price is low. But it's also horribly dated, short on features and hasn't been tested by independent labs for years. A major refresh is needed before TrustPort can properly compete with the best of the rest.