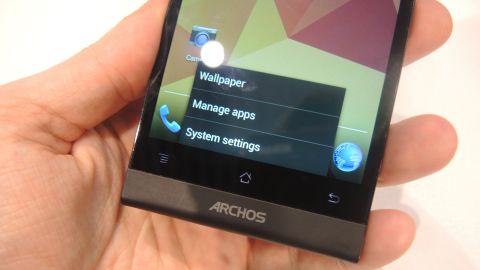 Decent, but the design is hardly a breath of fresh air

Archos has been hitting MWC 2014 headlines for a certain unfortunate event involving a water-resistant phone demo and a misunderstanding of IP ratings, but it's brought a lot of positives to Barcelona too.

The Archos 50c Oxygen is one of them. A mid-range handset with a pleasant list of specs, the Oxygen gets a dose of Archos' favourite matt black finish. And at just 7.6mm thin, it also deserves a hats-off for keeping things compact.

Ok, so it's not the most inviting handset out there, but what Archos misses in flare it makes up for in price - the 50c Oxygen will retail for less than £200 ($200, around AU$223), which is pretty decent for this mid-ranger.

The rest of the spec sheet is also decent for a middle-of-the-road phone. The 5-inch 1280x720 resolution display with its 293 ppi showed colours vibrantly during our test, but it also loves fingerprints.

Seriously, it can't get enough - and we needed to give it a fair few wipe-downs during our hands on session.

Crack the phone open and you'll find a speedy octa-core 1.7GHz processor inside but that's paired with just 1GB of RAM.

While we found Android ran pleasingly smooth during our hands on thanks to those eight cores, we expect that over longer, more intensive use the 1GB may show its cracks.

The 8GB of internal storage is standard for a mid-range phone, but Archos is letting us bulk that up with microSD, which we're very thankful for.

All other things considered, it feels like this should come with Android 4.4 KitKat out of the box. Instead it will be running 4.3 for the time being, and no one was able to tell us whether we might see a chocolatey update in the future.

Flip the Oxygen over you've got a 8MP camera capable of shooting 1080p video, while it's a 2MP job on the front.

The screen was rich enough to show off the good quality of the pictures, helped by Archos's improved camera app.

Plus, the rear LED flash will help bring those low-light photos to life, making the Oxygen a pretty decent mid-range cameraphone.

The Archos 50c Oxygen is a box-ticker. There's no defining feature to make it stand out from the crowd, but it's got enough going for it to make it a strong mid-range competitor. The affordable price tag should only help strengthen that position.