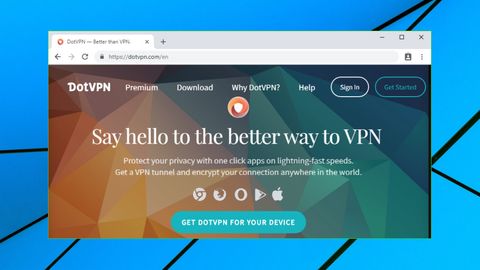 Poor as a VPN, and not even a good proxy, it's hard to see why anyone would spend money on DotVPN Premium.

DotVPN is a Hong Kong-based brand which provides free and commercial proxy and VPN services.

You can sample the proxy side with free browser add-ons for Chrome, Opera and Firefox. There are more VPN-like mobile apps (‘OpenVPN tunneling’ on Android, ‘IPSec tunneling’ on iOS), but surprisingly nothing at all for the desktop. The website mentions a DotVPN Desktop which should apparently be 'available in mid-2019', though as the company has been promising it since mid-2016, we wouldn't take that too literally.

The website claims the service offers unlimited bandwidth, 700 servers in 'over 10 countries', and integrated blocking of ads, trackers and analytics. Encryption is via a 4096-bit key and Tor integration enables accessing Tor hidden services (.onion sites) from your regular browser.

DotVPN's Premium Plan ($4.99 per month, $2.99 equivalent when paid annually) can be used on up to five devices simultaneously, and looks, in theory at least, like good value.

There's also a free plan, but it's seriously restricted. You don't get access to Premium's faster network, you don't get the same level of encryption, and there's no support for P2P, audio and video streaming, amongst other issues.

The company says, 'we store your IP address within 24 hours since you last connected', for instance.

There's a vague line stating that "we store the date of registration of your account to its own statistics." It would be interesting to know what those account statistics were, but DotVPN isn't saying.

The broader details are more encouraging, stating that your data is held on Hong Kong-based servers, and not sold or shared with anyone unless the company is forced to do so by a Hong Kong court.

We also noticed that the user agreement says you're entitled to make three simultaneous connections to the service, while the main site says you get five. Which one is accurate? We don't know, but this shows that you can't trust everything you read.

A quick look at DotVPN's Android and iOS app pages revealed an immediate problem: neither has been updated since 2015. Does that sound to you like an active company with significant resources, always fixing bugs and finding new ways to improve their service?

We installed the Android app anyway, and worked our way through the signup process by providing our name and email address.

The app launches using its free plan, allowing us to connect to any of its servers, and displaying your current location and connection status on a world map.

It didn't take long for us to notice an odd problem. When we connected to the Canadian location, for instance, we were assigned an IP address associated with the Netherlands. The Spanish location did the same. And the German.

Some locations worked as expected - the US server appeared to be in New York, the French was in Paris - but that's not much consolation if you need one of the others.

The app displays the total of the ads and trackers it's blocked, but these were permanently set at zero during our review. There was no sign of any ads being blocked by the service, either.

Upgrading to DotVPN's commercial Turbo plan saw one major improvement, in that the Canadian, Spanish and German servers correctly returned Canadian, Spanish and German IP addresses. It seems like these are Turbo-only locations, and although the free plan will display these locations as options, and tell you you're connected to them, it actually connects to the Netherlands server behind the scenes.

We didn't have as much luck with the ad and tracker blocker, unfortunately. The status display continued to tell us it wasn't blocking anything, and our visual checks suggested that was true (on one site, oddly, we saw more ads when we were connected via DotVPN.)

The app has several settings, but these are just switches to toggle various settings on and off (including the ad and tracking protections which don't appear to work.) There's nothing clever here, nothing to control encryption, change protocols or set up the app to automatically connect when you access an insecure network, and overall the app is much weaker than most of the competition.

The DotVPN website claims that the service allows you to 'access content regardless of regional blocking by switching your VPN location', which sounds good to us.

The reality isn't quite as impressive, as we realized when DotVPN's UK server refused to give us access to BBC iPlayer.

US-only YouTube content was easier to view, but that's no great surprise (just about every VPN in existence, free or otherwise, will get you past YouTube's minimal defenses.)

Netflix is the real unblocking challenge, and as we expected, DotVPN didn't get close. Whatever we tried, Netflix complained that we seemed 'to be using an unblocker or proxy' and refused to stream anything.

Our speeds tests suggested DotVPN performance is mostly terrible, even with local servers.

Connecting to our nearest location in the UK, for instance, saw speeds of 3 to 4Mbps with the VPN turned on, around 40Mbps when it was turned off.

Germany gave us better, though still poor speeds, at an average 10Mbps. US speeds were dire, at 2 to 3Mbps, and Singapore was much the same. That's disappointing, especially as this was with the Premium plan, which DotVPN tells us gives access to its 'faster network.'

Although it's not much consolation, the app did at least shield our identity, with privacy checks showing that our IP and DNS addresses were always correctly hidden.

Underpowered, with broken features, dire performance and no updates for the mobile apps since 2015, DotVPN is an unprofessional mess of a service. Check out the free version if you're interested, but the Premium plan isn't worth your cash.