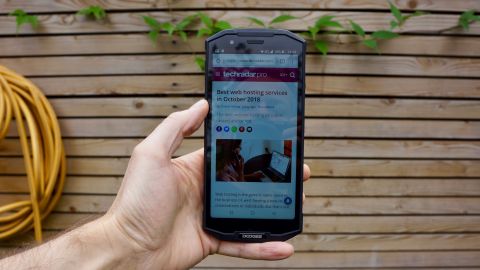 With it’s wide FHD screen, agile processor and optional joypad controls, this rugged handset handles games well, but its long battery life, some useful outdoor features and an affordable price give it a wider appeal, so long as you’re not put off by its looks.

Online Chinese retailer, Banggood, sells the Doogee S70 for £235 (around $305) at the time of writing. Note that, while this price includes delivery, it is exclusive of any taxes that may be levied by HMRC or the courier companies on behalf of the vendor. Want to buy tech from online Chinese retailers? Read this first.

The Spanish/Chinese brand, Doogee, has a range of unremarkable rugged and regular handsets available, but its latest model offers a surprisingly high specification for relatively little cost.

The S70 is advertised as ‘the world’s first rugged gaming phone’ aimed at ‘professional gamers’ whoever they are. ‘Get ready to brace for impact,’ is certainly the world’s worst tagline, but if you can get past the badly translated marketing nonsense, the phone itself looks promising.

The huge screen is Full HD resolution and there’s room behind it for two SIM cards and a big battery. The IP69K certificate suggests that it is tougher than your average tough phone and it has some features, such as a touchscreen sensitive enough to work with gloves on, that make it particularly good for use in adverse conditions.

Weather you go for the angular aesthetic, or not, the Doogee S70 looks like it is put together well enough to take the knocks. The cornerless design, rubber bumpers and metal panels inspire confidence.

Only the removable module housing the rear camera and fingerprint reader looks vulnerable. It stands out from the rear panel, so it always hits the surface first whenever you put the phone down. It picks up scuffs and scratches at this point, but it wasn’t enough to stop the S70 obtaining an IP69K certificate, which means it is slightly more water and dust resistant than the more common IP68 pass.

In all other respects, the metal and rubber shell gives the S70 six-sided protection against drops, which is important with a handset this heavy where even a short fall makes quite an impact. You’re more likely to damage whatever you drop this thing on than the phone itself. The screen size is 5.99-inch (but we’ll call it 6-inch from now on) so by the time you add a large battery and rugged casing, the S70 weighs 275g and it is quite a pocket full.

The rear panel is covered by a particularly unconvincing faux leather material that is actually yet more rubber. It looks naff, but does offer grip and protection. Two rubber-sealed ports guard the SIM-card slot and a USB-C socket. The SIM tray can take two cards for total global coverage and still leaves room for a microSD card. The USB-C port is for data transfer and charging the battery.

There are three metal buttons on the handset; a volume rocker, power button and an assignable function button that currently switches the phone into game mode. Unless you’re a ‘professional gamer’ you might prefer to reassign that button to be a torch, or some other function that you use a lot. We couldn’t work out how to do that, but by the time this phone goes on sale, there should be a manual to explain it.

This phone was designed with gaming in mind and the long 18:9 aspect ratio lends itself to 3D games where the screen is split in half down the centre. Doogee has also developed an accessory that cradles the phone and turns it into a handheld games console. It looks very clever, but no sample was supplied because we’re more interested in how the S70 holds up as a handset you might use for work.

Here are the full specs of the Doogee S70:

It might not be the prettiest smartphone, but at least the Doogee S70 looks good on paper. Being built around a Helio P23 Octa-core processor and a similarly powerful graphics chip by ARM, the S70 is good enough to handle graphics heavy games without grinding to a halt. Having The 6GB of RAM and 64GB of ROM helps too. It excelled in our bench tests in terms of gaming when compared with other budget models.

The six-inch screen is Full HD resolution and shielded by the toughest Gorilla glass. The rear camera is a dual lens 12MP plus 5MP model by Sony capable of artistic bokeh background shots, while the front camera, by Samsung, has an even larger 16MP sensor.

There’s a fingerprint reader on the back, which seems to work very well and face recognition is an option too. When you’re working outdoors with gloves on, this might be your preferred option, even though it is less secure. We also found that the Doogee’s touchscreen display can be used while wearing gloves too, provided they’re not too think.

The Doogee S70 runs the latest version of Android (Oreo), but Doogee has given it a subtle makeover and added a potentially useful suite of apps called ToolBag for DIY and outdoor jobs. They make use of the camera and accelerometer etc, to give you apps like the virtual plumb bob, a gradient-finder and a picture hanging tool.