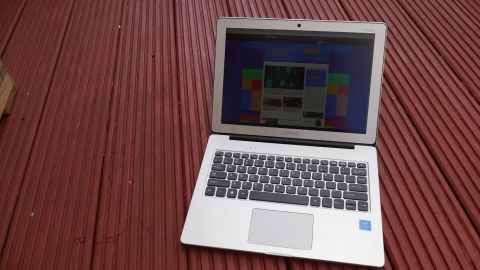 Chuwi’s LapBook 12.3 is a hell of a lot of laptop for your money, with a showstopper of a display.

Chuwi is one Chinese PC manufacturer that hasn’t been short on product releases over the past 12 months despite being a relative newcomer outside of mainland China.

(ed: Chuwi is about to start an Indiegogo campaign to produce a 2-in-1 laptop that surpasses the Surbook in terms of sheer performance. Its most salient feaetures are a Core M3 CPU and a fingerprint reader. Find out more here)

Online Chinese retailer, Gearbest, sent us the sample and sells the LapBook 12.3 for around £230 ($300) with the coupon code GBCHUWIS. Note that while this price includes delivery, it is exclusive of any taxes that may be levied by HMRC or the courier companies on behalf of the vendor. Want to buy tech from online Chinese retailers? Read this first.

The Hi13, Hi10, LapBook, HiBox Mini and the Hi12 have all been well received, with the Hi series aimed squarely at Microsoft’s established and award-winning Surface range. Not to mention the fact that Chuwi has already signalled its ambition with an outlandishly popular crowdsourcing project, the Surbook, that has raised almost 20 times more than its target goal with nearly two weeks to go.

In many respects, the above comparison with the Surface Pro 4 is a distraction. A better way to think of this device is: if the iPad Pro and MacBook Air had a love child, it’s likely that it would look like the LapBook 12.3. There are very clear design cues that point to some serious aesthetic inspiration from Apple’s range of products (but then Apple’s legendary CEO, Steve Jobs, quipped himself that the company has “always been shameless about stealing great ideas”).

Given the black rim surrounding the screen and the thick bezel, the wedge profile, all-metal chassis and the ‘mono-hinge’ along with a brushed aluminium finish, it’s not surprising that many people’s initial thought will be ‘Apple’ when glancing at this notebook for the first time.

Like the iPad Pro and the Surface Pro 4, the LapBook 12.3 has a display with a 3:2 aspect ratio and like the latter, it is a 12.3-inch model with a 2,736 x 1,824 resolution. That’s almost five million pixels, more than twice what you’d expect from a pair of full HD monitors.

This is a rather large laptop at 293 x 200 x 15mm with a weight of just under 1.4kg. A major element that contributes to the big footprint of the LapBook 12.3 is the thick bezel – tablet and laptop vendors use these because they come in handy for holding your device in touch mode.

But this laptop isn’t touch-capable and the matte finish only serves to underline this point, so all in all, this is a rather confusing move by Chuwi here.

Elsewhere, the notebook packs two USB 3.0 ports, an HDMI connector (that can support 4K at 60Hz), a microSD card slot, a headphone socket and a proprietary power port which connects to a 24W (12V, 2A) brick-style power supply unit.

Flip the machine over and you will discover a flap that hides an empty slot where you can plug in an M2-size SSD, plus there are two speaker grills and four rubber feet on the underside.

Inside the LapBook 12.3 is the increasingly popular Intel Celeron N3450, a 14nm member of the Apollo Lake family, which is a quad-core (four-thread) processor with a 1.1GHz base frequency bursting to 2.2GHz. It has a 6W TDP and 2MB cache, along with integrated Intel HD Graphics 500 clocked at 200MHz, bursting to 700MHz.

Backing that up is 6GB of system RAM, probably in a 4GB plus 2GB setup, designed to make the most of the dual-channel memory support of the N3450. Note that the CPU supports up to 8GB of RAM so in theory, assuming that none of the memory modules are soldered in and the memory slots are accessible, you should be able to swap them.

As expected, the storage subsystem consists of 64GB eMMC memory (Toshiba 064G93, a popular model amongst Chinese brands), which is one way manufacturers manage to cut down on costs.