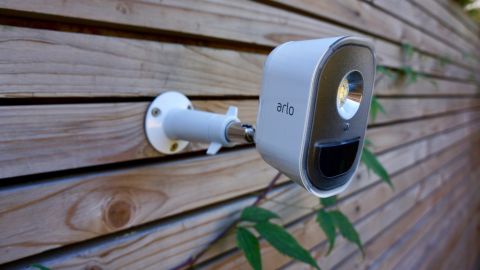 It’s expensive, but this well-designed smart light makes a good first line of defence for any office and the perfect compliment to an Arlo camera setup.

Now that Arlo has been successfully spun off from parent company Netgear, it has chosen this moment to expand its portfolio of smart security cameras with its first smart security light. We have been impressed by the Arlo Q and the Arlo Pro 2, so a move into lighting looks like a very logical progression. The really good news is that the light works with the existing devices and expands the functionality of the whole system.

The Arlo Security Light comes with its own wireless bridge so you can use it independently as a light-based motion-triggered alarm system, but it can also prompt Arlo cameras to record when it senses an intruder. This single light package can be bought for $180 (around £140, AU$250), which seems a little expensive for a smart light, but it includes a wall bracket, battery, cables and everything you need to set up and is supported by a slick companion app that opens up more features.

The Security Light is about twice the size of the Arlo Pro 2 cameras, but we would still describe them as compact and the design aesthetic is the same. The smooth white plastic looks smart and it’s waterproof to IP65 certification, so you can leave it outside all year round. You can even buy rubber skins that cover the white plastic body which come in black, or green camouflage so that they better blend in with their background.

The light is completely wireless and the only connection, hidden behind a rubber seal on the bottom, is the micro USB port for charging the Arlo battery. The battery is removable and compatible with the Arlo Pro 2 security cameras so you can switch them around, or charge two batteries at the same time using the Arlo Pro Charging Station accessory (available separately).

The mounting bracket uses a standard screw fitting, like you find on every camera mount, and is made of metal with a ball and socket joint so that you can point the light where you want it. You can select spotlight, or floodlight within the app, so being able to direct the beam physically is useful.

Also in the box is the Arlo Bridge which plugs directly into a wall mains socket and connects the lights to your existing Wi-Fi router. It’s slightly annoying that you have to plug in yet another wireless bridge, but the reason is because the lights connect via low energy Bluetooth rather than Wi-Fi which would use up the battery more quickly. And if you already have the Arlo Pro 2 cameras, you will still need to plug in this bridge because, for some reason, the cameras use a different wireless protocol.

Here are the full specs of the Arlo Security Light:

This product is essentially a wireless and waterproof LED light with a motion sensor that switches it on, but when you download the Arlo smartphone app, you will see that it can do much more than a non-smart security light. You can choose between spotlight and floodlight, adjust the sensitivity of the motion detection, which works up to 7 meters, set the duration that the light will be on after detecting motion and choose how dark the ambient light needs to be for the light to come on. You won’t want to waste your battery by letting the light trigger in daylight, so you could just leave on the default dawn to dusk setting. And as a party trick, you can even choose the colour of your beam.

The functionality of the security light is increased significantly if you also have the Pro 2 cameras because one device can be programmed to trigger another. For example, if the light detects motion, it can prompt a camera to start recording in another location, or a camera could trigger the floodlight and thereby improve its video quality.

The cluster of LEDs is able to produce 400 lumens, which is bright, but not as bright as an electric security light.  The wireless range between the light and its bridge, which can only be plugged indoors, is 30 meters, so it should reach well into a garden.

Thanks to an intuitive companion app, setting up the Arlo Security Light is easy. The battery arrives fully charged, so you can just load it in, press the Sync button and use your phone to look for it and connect it with the Bridge. There’s no on/off switch on the light itself, so you must use the app to turn it on and select the way you want it to work. From the box, the dawn/dusk setting will ensure the LEDs illuminate when motion is detected only during the hours of darkness. The app makes it easy to change this time period and the sensitivity of the motion sensors.

If you have the Arlo Pro 2 cameras as well, you can go deeper into the app and ask one device to activate another. This is slightly more complicated, but if you are familiar with the concept of If This Then That (IFTTT) you will soon get it.

We were somewhat surprised and disappointed that the mounting brackets are not the same as the magnetic kind used with the cameras as it would have been great to be able to chop and change their locations without having to unscrew anything. Presumably the larger Security Light is too heavy for the magnet so it comes with a metal mounting bracket instead. Arlo has even included the three screws that you need to fix it to the wall.

The Arlo Security Light is a pleasure to use and to live with, partly because it is so readily addressable by the app but mainly because it integrates so well with other Arlo devices. Motion detecting lights are useful for deterring intruders, but they’re equally useful for illuminating your own path or doorway and the fact that you can alter the sensitivity, duration and colour of the light using your smartphone puts it way ahead of non-networked security lighting.

The beam is not the brightest, but we found it bright enough and if it means charging the battery less frequently, then we think Arlo has judged the lumens about right. Surprisingly, brightness is the one thing you cannot alter via the app, although that isn’t really a problem.

One thing the light is particularly good at is helping Arlo cameras to record higher quality footage at night. For example, we set the light up so that it would illuminate the garden when movement was detected, which significantly improved the detail resolution of what the camera recorded. In another situation, the camera’s motion sensor in the garden could be set to trigger a security light in the hallway, thereby lighting your way when you go to see what’s going on outside.

The only limitations are the brightness of the LEDs, battery life and the wireless range, because the 30-meter radius is significantly reduced by walls and other physical barriers. It depends how you set your system up, but the light could last for a week, or possibly a month on a single charge.

The initial cost of the Arlo Security Light seems high and that would be our biggest criticism, but it is undoubtedly well designed, well made and useful, particularly if you have other Arlo devices. It makes a good first layer of defence by putting off would-be intruders and is also convenient for lighting your own path. It’s also flexible in the way you can set the parameters to suit your needs, while being fully wireless makes it especially easy to install.

A magnetic mounting bracket, as you get with the cameras, would have been nice and it’s a pity you have to plug in another bridge unit, but that aside, this simple design with its intuitive companion app will appeal to anyone looking for basic subscription-free security and of course, anyone who already has Arlo cameras.