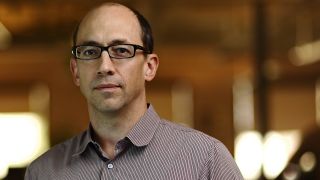 Twitter CEO Dick Costolo announced that he will resign from his position on July 1, handing the leadership of the company to co-founder Jack Dorsey until a permanent replacement is found. In a conference call with investors, Costolo indicated that he had wanted to step down since the end of last year.

Wall Street responded favorably to news of Costolo's resignation, with Twitter's (NYSE: TWTR) stock up seven percent in after-hours trading. The company has been under pressure from investors to deliver better financial performance after declines in stock prices and slowing user growth rates.

Costolo's resignation announcement comes just a day after company co-founder Biz Stone defended the CEO, addressing calls for Costolo to be fired as "crazy" and that any criticism about his performance is "water off a duck's back." There have also been recent rumors of a Twitter acquisition by search giant Google.

Costolo tweeted his departure on Twitter, writing, "Welcome back, Jack." Dorsey will continue in his role as CEO of mobile payments company Square while also filling in for Costolo until a replacement is found.

Twitter hired crisis management firm Sard Verbinnen to handle the transition in leadership. This is the second high profile executive exit in a year's time.

Almost exactly a year ago, the Journal reported on June 12, 2014 about the sudden departure of Twitter Chief Operating Officer Ali Rowghani, following a dispute with Costolo amid concerns of waning user growth rates and profitability.

After news of Costolo's exit, Twitter tweeted, "Our CEO, @dickc, will step down as CEO, and we'll welcome @jack as Interim CEO on July 1." Costolo will remain on the board at Twitter.

"I am tremendously proud of the Twitter team and all that the team has accomplished together during my six years with the Company. We have great leaders who work well together and a clear strategy that informs our objectives and priorities," Costolo said in a letter to investors. "There is no one better than Jack Dorsey to lead Twitter during this transition. He has a profound understanding of the product and Twitter's mission in the world as well as a great relationship with Twitter's leadership team. I am deeply appreciative of the confidence the Board, the management team and the employees have placed in me over the years, and I look forward to supporting Twitter however I can going forward."

During his tenure at the top at Twitter, TechCrunch reported that internal sources say employees loved Costolo. "He brought order to Twitter when it was still in its chaotic adolescence, and turned it into a serious business," the publication reported.

However, not everyone shares the same view. The Wall Street Journal ran a scathing profile of the executive, calling him a "a reactive thinker who bounces from one idea to the next," while investors have been calling for his resignation in the past months.

Whoever succeeds Costolo will have to grow the service beyond a destination for the latest trending news. In the past, Twitter attempted to enter the music space unsuccessfully, and the company faces competition not only from Facebook and Instagram, but also from messaging services from Snapchat, Google and others.

The company has lost approximately 20% of its value since going public with an IPO in November 2013.

The next CEO of Twitter will also need a decisive strategy for the company.

With Costolo out, Twitter could be setting itself up to be acquired. With a $24 billion market valuation, few other companies can afford to buy Twitter. The New York Times reported that Google is rumored to be eyeing a Twitter acquisition.

Twitter would give Google clout in the social networking space after Google+ failed to take off as planned. Since Google+ boss Vic Gundotra left his role last year, Google has been splitting up some of the services that were bundled with the social networking site, including Photos and messaging. Google Photos, born out of a Google+ service, was announced recently at Google I/O 2015.

A combined Google and Twitter could help both companies take on Facebook in the space, and Google could better monetize Twitter with targeted ads. Currently, Twitter only accounts for 3.6% of the internet ad market in the US. Google leads this market with 36.9% followed by Facebook's 18.5% share.

On the same day as Costolo's announcement, Twitter is already making big changes. Twitter announced that it will remove its notorious for its 140-character limit – previously set in place to keep messages on point and succinct – on direct messages, or DMs starting in July. The company said that regular tweets will still be constrained by the 140-character rule.

Twitter has also made positive strides recently with its approach to handling cyber-bullying and internet trolls.

Read our profile of Dick Costolo