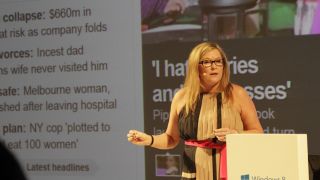 Aussie developers on board

At the Australian Windows 8 launch in Sydney this morning, Microsoft Australia boss Pip Marlow showed off the new Westpac application for Windows 8.

The free app is designed to take advantage of the key Windows 8 functionality. The most useful element is the ability to pin account gauges to the Start screen.

Rather than displaying your account balance on the screen, the app allows you to input a custom balance as a minimum and maximum, and then pins a gauge to show where the balance sits in between those numbers.

Because the tile updates in real time, you can keep track of your money without needing to login to the application every time.

Westpac lets you transfer funds by dragging from one account to another on the screen and entering in the desired amount.

Similarly, sending money to another person has been simplified for the touchscreen experience.

Australian developers on board

Microsoft also took the opportunity to show off a range of locally developed apps for the launch.

In addition to Westpac's app, Microsoft showed off Windows 8 ports of Fruit Ninja and Jetpack Joyride from HalfBrick Studios; SBS's catch up TV service On Demand; and deal aggregator All the Deals.

One of the early criticisms of the Windows 8 platform, and especially the Surface tablet, has been the lack of dedicated applications on Microsoft's Store. With a range of Australian developers on board, Microsoft is hoping to stop those complaints before the platform really takes off.