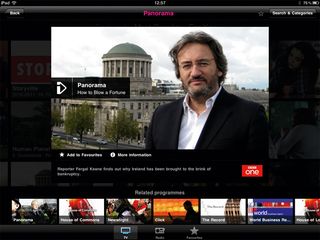 BBC rolling the global iPlayer out to iPhone and iPod touch

The BBC is opening up its Global iPlayer app to the Apple iPhone and iPod touch, six months after launching as an iPad exclusive.

BBC Worldwide's subscription-based offering, which boasts a range of new and classic programming, is available in Europe and Australia and last week launched in Canada.

From this Thursday, December 8, those viewers will be able to access the service on all of Apple's iOS devices.

BBC Worldwide CEO John Smith says: "The global BBC iPlayer has seen great growth since the pilot first launched in July – both in terms of geographical expansion and technological developments.

"Moving to iPhone and iPod Touch allows us to take the service to a significant new potential audience and deliver fantastic programme content from the BBC and the UK's creative industry."

Independent shows and BBC Radio too

Further developments will bring independent TV shows that were not created by the BBC.

As part of a deal with the DRG programme distributor 'best of British' shows like Father Ted and Peep Show, which originally appeared on Channel 4, will also be included in the Global iPlayer app.

The Beeb also plans to integrate selected radio content, while Music, and Arts and Culture TV categories will also be added.

"This platform extension shows how Global iPlayer isn't just about moving TV to tablet devices, it's also about a mobile strategy – about truly getting TV everywhere in a way that it hasn't been before," Janna Bennett, President of Worldwide Networks and Global BBC iPlayer, said.