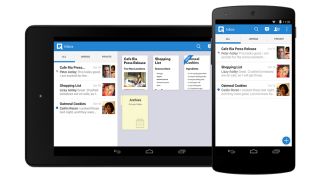 Quip, a mobile document editing app looking to tap into the collective conscious of busy productive types on the move, has arrived with some impressive credentials in tow.

Founded by ex-Facebook CTO Bret Taylor and Google App Engine founder, Kevin Gibbs, some of its features - such as automatic synching and checklists - will be familiar to Evernote users, while others - such as @mentions used for collaboration - are borrowed from social media.

It also offers third-party keyboard compatibility (Swiftkey and Swype are supported), a responsive ability to adapt to any device's screen size and a heady dose of multi-authoring collaboration.

First launched on iOS back in August before being ported to Android in December, Quip's creators position the app closer to a fully-fledged word processor, capable of "doing for smartphones and tablets what Microsoft office did for PCs". We spoke to Bret Taylor to find out more.

TechRadar Pro: You claim that Quip has re-invented word processing for mobile devices - that's quite some claim. Can you tell us more?

Bret Taylor: Since the iPhone was introduced in 2007, phones and tablets have transformed the way we interact with technology and each other. Smartphone sales have already overtaken PC sales, and tablet sales are predicted to pass PCs this year.

To call this shift disruptive is understating its impact on our industry and the world. Companies built on the PC ecosystem are desperately trying to find an identity in this new world, and many of them won't succeed. Most people in the developing world will access the Internet for the first time through a mobile, touch-screen device without ever touching a PC.

Despite the magnitude of this shift, the software that we use to get work done has not evolved over the past thirty years. With the exception of some additional color and and a stack of toolbars at the top of the screen, it doesn't look different from MacWrite, which was released with the original Macintosh in 1984.

Quip is our perspective on how modern, mobile documents should work. Building for the new mobile era is not about adapting old desktop software; it is about rebuilding from the ground up assuming multiple platforms, multiple screen sizes, intermittent network connectivity. In Quip, we've re-thought everything — from the user interface to the underlying technology — to create the product that is simple and easy to use regardless of platform or screen size, and that we enjoy using to get work done every day.

TRP: Why should consumers check out Quip over similar competing products? Particularly Evernote, which has similar note-taking and collaborative online and offline functionality for businesses.

Collaboration - We want using Quip to feel like two people sitting next to each other at the same table, writing on the same piece of paper. Writing a document with someone should be simple, easy, immediate, and delightful. Most of the other services we've used don't achieve that feeling in their collaboration.

Mobility - Quip works well on the desktop, but it really shines on phones and tablets. We built it from the ground up assuming that you would use multiple screen sizes, spotty internet connections, and multiple platforms. For other products, offline access is a feature — something you have to turn on or pay for, that may only work in some situations. For Quip, working offline is the fundamental core of our product.