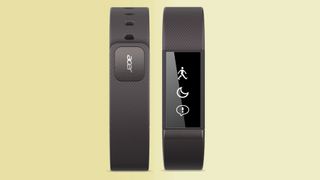 Acer's Liquid Leap is looking to make a splash

Wearables "are toys at best and will be returned within a week" by people if their makers fail to support them with innovative cloud services.

That's according to Acer CEO Jason Chen, who told TechRadar Pro that the wearables battleground will be won by companies that collect user data to differentiate and provide people with meaningful insights.

He said: "The wearables market today is very diverse because people don't really know what they want from them. We believe that what really matters is the back-end cloud platform. That needs to be set up and ready so that people aren't just collecting their steps, or heartbeats, but they are also comparing those stats against the same age group and community.

"Take a marathon, for example. What's their best time? How does it compare to last year, or 10,000 other runners? Can we generate a graph? That's much more important than knowing how many steps somebody is taking."

Chen points to a forecast made by analyst firm Gartner that money to be made from cloud and data mining (or spotting patterns and trends in data) could stand at around 250bn dollars, compared to that from from selling hardware devices, which it predicts ranges from 10bn to 15bn dollars.

He added: "The opportunities are there, so we will have to pay attention to not just the hardware, but the software and services too."

Back in April, Chen coined the term "BYOC", or bring your own cloud, which allows owners of Acer products to store and transfer music, photos and other data across devices while having it synced up to the company's servers.

That was put into practice following the launch of Acer's first wearable, the Liquid Leap, a fitness tracker on a rubberised band that measures steps, calories and sleep and is only available if bought with the company's Liquid Jade smartphone.