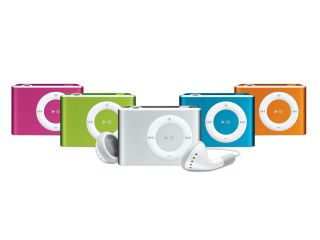 Apple has added four new colour to the iPod shuffle, so now you have five to chose from

The expected product announcement from Apple came - but with a whimper rather than a bang. The company has announced four new colours for the iPod shuffle - blue, orange, pink and green which join the original silver.

Spec for the iPod shuffle otherwise remains unchanged. It still has 1GB of memory - or enough for around 240 songs - plus a claimed battery life of 12 hours.

There was no way that Apple could steal Microsoft 's thunder on Windows Vista launch day - and it looks like they haven't really tried either.

UK pricing for the new coloured shuffles - which are available now - is unchanged at £55.