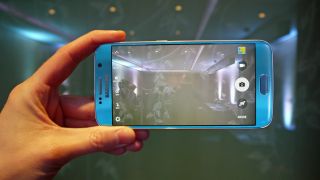 Samsung is already a big manufacturer of application processors.

Lee Epting, the newly appointed VP, Enterprise Business Team and Media Solutions for Samsung within EMEA, is a lady with a mission; to help Samsung's newly announced Business aggregation deliver on the company's goal to achieve $400 billion worth of revenue in 2020.

With the consumer market showing signs of plateauing, the role of B2B within Samsung has grown tremendously, which prompted the Korean company to unify its enterprise business units under the Samsung Business banner.

There's no organisation change per se and, Epting told me, that "the time is now to have single brand to put our business behind in terms of B2B effort".

The blurring of lines between what personal and business also constitutes a massive opportunity for Samsung. Epting mentioned a startling statistic; 70% of western homes have a Samsung smartphone and the percentage is probably higher when you include tablets.

Dr. Won Pyo Hong, President of Samsung Electronics, made it clear during a keynote at CeBIT 2015 in Hannover yesterday that the main strands of the company's enterprise strategy would focus on three key points; an IoT ecosystem, Big Data and security.

Data at the centre

Underpinning that strategy is the growing importance of Samsung's sprawling back-end infrastructure handled by the company's own version of Amazon Web Services, called Samsung SDS.

This little known business unit within Samsung brought in revenues of more than $7.18 billion (up 12% on the previous year) but has been rarely in the limelight despite its financial clout. It is smaller in terms of revenue compared to HP's Enterprise group but generate a higher profit.

While it is very unlikely that Samsung will ever try to compete with the commodity cloud suppliers like Amazon, Microsoft or Google, it would make sense for the company to invest significantly in data centre technology, the same way as it does for smartphones.

Samsung already have most of the pieces of the puzzle and already produces a lot of components for data centres (SSD, RAM) but doesn't delve in compute (SoC) or networking (backplane etc), yet.

But that may well change as reports have emerged over the past 24 hours of a directive, one issued directly by Samsung Electronics' Vice Chairman, Lee Jae-Yong, to "strengthen technology capability in order to design not only mobile devices but also various semiconductors".

While many suggest that he might be referring to entering the custom core business (similar to what Nvidia, Qualcomm and ARM), its newly found focus on IoT and Big Data means that there's a definite possibility that it will design and fab chips for its own server and IoT business, both likely to use ARM technology.