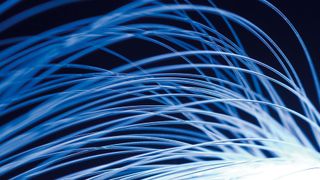 Google believes we need more fibre in our internet diet

A Google executive announced that the company is working on broadband technology that is ten times faster than its current fibre offering.

The search giant is developing a 10Gb broadband offering, according to Patrick Pichette, CFO of Google, who revealed the plans at the Goldman Sachs Technology and Internet conference this week.

He said the speed boost is "going to happen" anyway, but that it may take over a decade for that to "naturally" occur. When asked why Google wouldn't make it available in just three years, he said, "That's what we're working on. There's no need to wait."

The planned internet boost is substantially faster than the already impressive 1Gb Google Fiber service it offers to the lucky people in Kansas City.

To put this speed into perspective, a high-definition video would take roughly 22 minutes to download at 5Mbps speeds, which unfortunately is the maximum some people in the UK have access to.

With 1Gb connections, it would take just seven seconds to download the same file. Now imagine speeds ten times that. Google is currently rolling out its fibre network to Provo, Utah, and is looking to expand to Austin, Texas.

Eventually, it will attempt even wider coverage, and the 1Gbps speeds are just the start. It has yet to disclose any plans to expand overseas.