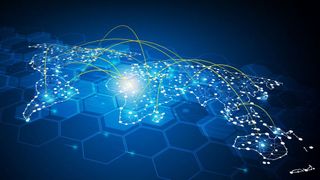 Most mobile network operators (MNOs) use ETSI Class 3 (C3) point-to-point (PTP) dish antennas when designing microwave backhaul links. However, a 2009 study by CommScope revealed that a significant proportion of antennas failed to meet their published specifications – usually the declared sidelobe, or off-axis gain performance, along with cross-polar performance.

This affects the quality of the network as it can degrade link performance and therefore capacity, which can be compromised by increased interference between links. Interference reduces data throughput affecting quality of service (QoS), which in turn can cause customer churn and reduce operator revenue.

CommScope also found that underperforming C3 antennas can significantly constrain an operator’s ability to reuse spectrum, potentially limiting the number of links that can be deployed for a given amount of spectrum in any geographic area.

As a result of these findings, CommScope developed the first ETSI Class 4 (C4) antennas in 2010 designed to offer major improvements over existing sidelobe or off-axis gain standards.

Last year it got the chance to trial the potential benefits of its C4 antennas on UK operator EE’s live network using iQ-link XG link planning software from Comsearch.

Dipesh Rattan, product line manager, Microwave Antenna Systems at CommScope, says: ‘We believe our Andrew family of antennas can provide value and benefit in terms of QoS and capacity for end users. We worked with EE to agree a joint analysis and study on data across the 10GHz, 32GHz and 42GHz bands.

‘We have products in each of these bands, so we got a lot of support from EE to get the data from its live network and analyse it. This enabled us to create accurate simulations and conduct frequency-planning analysis. The results are truly compelling with a lot of benefits in terms of using microwave backhaul network for improved QoS and costs,’ argues Rattan.

This has increased significance with the roll out of 4G LTE networks because, as Donald Gardner, product line manager, Microwave Antenna Systems, CommScope, observes: ‘An LTE network has a lot more cells in any given area and that means you have a lot more cells to backhaul, so more links are needed.

‘It is mostly data being backhauled, so you need a lot more capacity on the backhaul and that sets up a perfect storm, because if you need more links and more capacity, but you use a C3 antenna, it doesn’t fit the bill.

‘But if you use C4 antennas with a lower sidelobe you can get a lot more links in any given area. The key thing for us was: this all works well in theory, but how to prove it? We were incredibly fortunate that EE and Andy Sutton’s team allowed us to profile this on a real network.’

Andy Sutton, principal network architect at EE, takes up the story: ‘The focus was on microwave line-of-sight PTP wireless radio backhaul using C4 antennas. Most PTP microwave links use C3 antennas, which have a certain radiation pattern envelope (RPE). C4 antennas have a much tighter RPE envelope. (See image below).

‘From EE’s perspective our interest was in how to make the best use of our 10GHz, 32GHz and 40GHz microwave bands to deliver the higher capacity required for 4G LTE backhaul. One of the most common techniques for increasing link capacity is to implement wider RF channels.’

In particular, EE is looking to upgrade its 32GHz and 40GHz radios from existing 28MHz channels with higher capacity radios using 56MHz channels.

The wider point here that if EE uses spectrum outside its self-owned spectrum bands it would incur substantial additional operating costs. ‘We are looking to find the optimal TCO,’ says Sutton,’ so we want to use microwave in the spectrum bands we own to get lowest cost. And the advantage of using the tighter RPE of C4 antennas is that we can deploy a greater number of links in a given frequency band within any given geographical area.’

‘Because of the tight RPE patterns and low sidelobe patterns of C4 antennas, it allows the microwave link to be available for a longer time and it is also more immune to interference than C3 ones,’ says Rattan.

‘The C4-based microwave link adds more capacity as the link is both available for longer and has a higher throughput for a longer time. They also enable a tighter use of frequency channels, so you have a more efficient microwave backhaul network.

‘In short, the C4 product enables a better utilisation of existing spectrum resources, as it allows better capacity on these links for wider channel radios and this means more traffic can be carried on the microwave backhaul links,’ says Rattan.

The point here is that if C3 antennas were to be retained, to free up the congested links EE would have to either find and pay for Ethernet lease lines for the backhaul or buy additional licenses for a minimum of two channels from regulator Ofcom (if spectrum is available).

However, at least 88 of these 192 congested links could be recovered just by using C4 antennas in the existing spectrum. Using established EE cost models - the TCO over five years for a microwave radio link is US$23,000 and corresponding Ethernet backhaul cost of $93,000 - the study showed that there is a potential to save $70,000 over five years using microwave links instead of Ethernet leased lines; providing a saving of at least $6.1 million for 88 links over five years.

Sutton says: ‘We want to maximise the use of our own spectrum assets, so deploying as many microwave links in those band as possible helps minimise our costs, while maintaining network performance and optimising our TCO. By deploying a lot more links in the 32GHz and 40GHz bands we can evolve our network in the most efficient way.’

He notes that swopping out the antenna can be done at the same time as the higher capacity 56MHz wide channel radios are installed as part of EE’s ongoing upgrade programme. Gardner adds: ‘The installation is identical as for a Class 3 antenna, but it is a far, far better product.’

In fact, the CommScope study showed that of the 4,096 links in EE’s 40GHz network, 2,315 are candidates for the higher capacity 56MHz radio upgrades (the remaining 1,825 links did not have sufficient fade margin to meet the availability objective with new radios).

However, 68 of the 2,315 links could not be upgraded to 56MHz using existing C3 antennas, but all could be upgraded if a Sentinel C4 antenna is used, as it helps achieve a higher signal-to-noise ratio on the microwave link.

Other tests showed that the low sidelobes of Sentinel C4 antennas could improve the frequency reuse in an existing network. Tests showed if C4 antennas are used in the 40GHz network fewer channels are required than for C3 antennas.

Assuming the same network geometry, by freeing up two channels up to 3,000 new links could be deployed. This provides a much higher spectral efficiency and makes possible a substantial future network expansion just using existing available spectrum.

Gardner also points out: ‘There is also an opportunity, albeit not a big one, but an opportunity nevertheless, to reduce the size of some of the antennas from 3-4ft (0.6m) diameter down to half that size (0.3m) by using C4 antennas. This is because the RPE of C4 antennas allows you do this without incurring additional interference. This in turn reduces the size and weight loading on the tower and therefore reduces the tower lease costs.’

So, what next for EE? Sutton says: ‘We are working on the detailed business case for C4 antennas to determine how broad a roll out to do. We have identified the sites where we can use our spectrum in the 10GHz, 32GHz and 40GHz bands and we expect to start work this year.’

Gardner sums up: ‘We think the benefits of using C4 backhaul antennas are quite compelling for operators. Capacity is finite so in reality the industry has to make the best use it can of its existing spectrum and infrastructure. Andy is trying to make the best use his, so other MNOs will want to do the same.’

Rattan adds: ‘What we’ve seen from different operators is that they are looking hard at TCO. As they move from 3G to 4G and beyond the density of microwave links is going up by the day but spectrum is finite. The challenge for MNOs is to add more density while the capacity grows, also bearing in mind that at the same time MNOs are under pressure to maintain or reduce costs.’

In conjunction with EE, CommScope studied the benefits of deploying Sentinel Class 4 antennas for wireless backhaul point-to-point in the 10GHz and 40GHz band in a network of 4,000 and 2,000 links. The core findings were:

• US$4.5 million TCO over five years based on optimising capacity by freeing congested channels

• 3,000 more radio links can be added to the network – when none had been possible before

• A strong opportunity to trade some of the above by reducing antenna size and thus reducing TCO on tower lease costs.