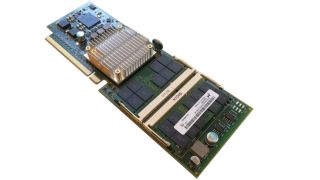 This ARM server board is barely larger than a phablet

TechRadar Pro met with Suresh Gopalakrishnan and Ian Drew last week during an ARM/AMD briefing in London; Suresh is Corporate VP and GM of AMD's Server BU while Ian is ARM's CMO. The joint event symbolised the strong relationship between the two companies.

The global annonuncement of AMD's first ARM-based server SoC (system-on-chip), otherwise known as the Opteron A1100, happened end of January 2014 with Suresh confirming that the first samples would be shipped by end of March 2014 with full production happening by the end of the year.

Née "Seattle", this part, which is part of the top-bin (i.e. the fastest parts from a particular batch) is built around eight 64-bit ARM Cortex-A57 cores clocked at 2GHz and fabbed at 28nm. Other useful titbits include a TDP of 20W, 4MB L2 cache and 8MB shared L3 cache.

Gopalakrishnan also confirmed to TechRadar Pro that more SKUs will be released in due time including one with four cores and/or running at slower speeds.

What's surprising is the size of the board housing these, slightly larger than a phablet according to AMD's Corporate VP.

ARM's Ian Drew also added that most data centres are I/O constrained rather than performance constrained, a scenario that called for more targeted processors rather than the hitherto one-size-fits-all paradigm.

ARM ready to take on x86 in servers

He explained that the three reasons why ARM is now coming to data centres are tied to the rise of data, big and small, a wider industry support (from manufacturers and ODMs/OEMs) plus a massive improvement in efficiency.

ARM-based servers are expected to account for 25 per cent of the market by volume by 2019 according to Gopalakrishnan, a very conservative number that underlines AMD's reluctance to drum up its ambitions for ARM.

A development kit for the Opteron A1100 will also be available to select developers; it's a fairly bland-looking microATX motherboard that supports a standard PSU but ladden with useful applications.

Expect AMD's first ARM product to be readily available by year's end in the likes AMD's Seamicro servers as well as Boston's and HP's Moonshot range.