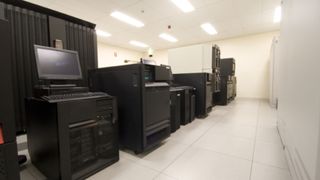 Energy consumption is taking up an increasing proportion of the overall datacentre running costs. Not surprising, considering that the amount of business-critical data is ever on the rise and new technologies have to be put into place to cope with this growth.

In the past, datacentre power usage would often be cloaked as a central services cost but, owing to the popularity of the 'greening your business' trend which was followed by several years of austerity, datacentre costs are now frequently absorbed by the IT department rather than being allocated to individual company departments.

E-commerce giant eBay is one example of a company whose IT unit is responsible for the group's datacentre power consumption.

A significant contributing factor in the cost of running datacentees is storage, usually on disks. Even archived files incur a cost if they are kept on spinning disks, as it all adds up.

However in the race to keep IT expenditure to a minimum and performance at optimum levels, there is another way. Unlike other storage media, tape does not draw power once the data has been written to it because it doesn't spin like disks do.

Allocating a large portion of the budget for data archiving alone is a potentially huge and unnecessary waste: it is estimated that, if datacenters were a stand-alone industry, they would be the sixth largest when measured by power consumption.

However over the years technological advancements have helped to reduce power usage: firstly, tape life and storage efficiency have increased tremendously over the past few decades, while much less time and expenditure are now required to write and store data to hard disks drives (HDDs).

This all translates into lower energy consumption. Tape is also a near-line storage mechanism when used in conjunction with an automated tape library. Tape media is able to store data while sitting on a shelf inside the library without consuming any power, until it's placed in a tape drive.

Because of this, tape libraries can densely pack high capacity tape cartridges within their confines to deliver many more PBs per floor tile than disk arrays.

Secondly, tape in the form of LTO5 and LTO6 has a capability called the Linear Tape File System (LTFS), an open tape file system standard that allows for long-term interchange between applications, tape hardware and manufacturers and, over time, it only gets better for tape.

Future generations (in this case LTO) will at least double in capacity and maintain the same storage footprint. As a result it is clear for all to see that tape offers a much lower cost and energy consumption alternative to disk when it comes to archiving.

So how do the figures compare?

According to a 2010 Clipper Group report, 'In Search of the Long-Term Archiving Solution — Tape Delivers Significant TCO Advantage over Disk,' TCO for disks is more than 15 times that of tape and HDDs use an astonishing 238 times more energy for an archiving application of large binary files than tapes, with a 45 percent annual growth rate, over a 12-year period.

The same study revealed that the energy consumption costs alone for a disk archiving or long-term data preservation solution nearly equalled the TCO of a tape counterpart.

The emergence of data-intensive markets and big data analytics has also led to a sharp increase in the demand for tape, and analyst houses such as IDC predict the industry to grow significantly over the coming years.

In a 2012 report entitled 'Worldwide Midrange and Enterprise Tape Automation' for example, IDC estimated the value of the 2011 tape market at $2.2 billion. Moreover, numerous reports, such as INSIC's 'International Magnetic Tape Storage Roadmap,' have demonstrated that tape is the most durable, reliable and resource-efficient means of storing large sets of data.

Businesses considering how to reduce their IT energy expenditure while grappling with the challenges that come with archiving increasing volumes of data should think green. As with any smart business, reducing outgoing costs is key to competitiveness.

With energy prices set to rise over the coming years, the budget spent on energy consumption will be even greater. In order to future proof against these challenges, IT managers need to consider their deep storage strategy more carefully before making the call.