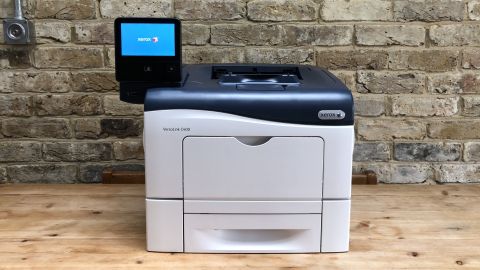 High end features like a customisable touchscreen make this an expensive, but well-specified machine that would suit a small office with high print demands.

The Xerox VersaLink C400DN is a colour laser printer aimed at the busy small to medium sized business. It offers the same high paper capacity and premium features found on Xerox’s serious freestanding office printers in a more compact desktop design, albeit a pretty big and heavy desktop design.

With room in the main paper tray for 550 sheets of A4 paper, a speedy print rate of 35 pages per minute and enough toner in the box for 2,000 colour and 3,000 mono pages, it is better suited to the small office than the home office. Xerox recommends this model for workgroups of two to ten people and a maximum duty cycle of 85,000 printouts per month. This model also showcases Xerox’s sophisticated 5-inch customisable touchscreen to which you can add apps from the Xerox App Gallery.

The price without Wi-Fi is around £348 inc VAT (US$449) and the price of a set of replacement standard toner cartridges costs a little more than that at £489 (or US$543) from Xerox.

Among print-only A4 devices the Xerox VersaLink C400DN is among the largest and heaviest we’ve tested. It’s certainly a two man lift and the bulbous plastic housing does nothing to make it appear smaller. Surprisingly, the step-up VersaLink C500DN looks sleeker, thanks to a more modern aesthetic, even though it’s actually taller and 2kg heavier.

There’s plenty of room for toner too. It ships with four cartridges that promise to deliver two thousand colour pages and three thousand monochrome pages. These are pre-installed and can be easily accessed by opening up the front panel.

At the rear are connections for a power cable, Ethernet port and both type A and B USB ports. You’ll find another USB port conveniently located at the front for walk-up printing from a USB flash drive, but be warned that only PDF, JPEG, TIFF and XPS file types are supported. Above this slot is the distinctive five-inch colour display found on most Xerox machines and this one does support the Xerox App Gallery, which means you can add and customise the apps that appear on screen.

Our sample arrived with a separate Wi-Fi module, which is a £50 (or US$50) optional extra. It simply slots in the back of the printer and adds both Wi-Fi and Wi-Fi Direct connectivity.

Here are the full specs of the Xerox VersaLink C400DN:

The Xerox VersaLink C400DN can print in mono or colour on almost any size paper up to A4, or US letter and print both sides automatically. It can handle envelopes and heavy paper, or cardstock up to 220gsm. Like all Xerox machines, it has strong security features including Secure Print which requires you to enter a PIN at the machine in order to complete a job.

Assuming you add the Wi-Fi kit, the C400DN’s connectivity is comprehensive with the choice of wired or wireless hookup, plus Wi-Fi Direct and NFC for making a quick connection to a smartphone without joining a Wi-Fi network. We’re always glad to see a front USB port for walk-up printing from a USB stick too.

The quoted maximum print speed of 35ppm for single-sided mono or colour A4 pages is fast, although there are faster machines, like the Xerox VersaLink C500DN, for example. The print resolution might seem low at 600 x 600dpi, but with 8-bit processing the result is said to be comparable to a 2400 x 2400dpi printer with 1-bit processing. In reality more resolution means more visible detail on the page, but with 8-bit imaging the C400 achieves 256 shades of grey which means you don’t get too much banding.

The headline feature, however, has to be the 5-inch colour touchscreen which brings smartphone-style control to your fingertips and adds further functionality. For instance, you can download an app that will connect you to your Evernote documents stored in the cloud and print them. It’s also worth mentioning that the Xerox VersaLink C400DN will continue printing mono documents when you run out of colour toner, unlike some other printers.

The model tested here is the Xerox VersaLink C400DN and that ‘D’ in the suffix indicates its ability to auto duplex. If you think that you will never want to print on both sides of the page, you could save £50 by choosing the otherwise identical C400N.

You can follow an on-screen procedure to initially set up the Xerox VersaLink C400DN, which includes choosing your preferred units of measurement and date style. When it comes to joining the local Wi-Fi network and typing in your password, you’ll be glad of the touchscreen interface.

Setup would normally be straight forward, but we had to resort to calling Xerox for support after repeated error messages popped up telling us that the ‘device is not connected to the internet.’ It turns out that it’s not enough to choose wireless connectivity and join your Wi-Fi network in the setup procedure, but that you also have to then go back into the settings menu and manually switch the Primary Network to Wi-Fi from Ethernet, which is the default. User error, or sloppy programming by Xerox? A bit of both perhaps.

On the homepage of the display, you’ll see five icons offering shortcuts to the main functions already installed, but you can add more yourself by visiting the Xerox App Gallery. Just press the icon and you’ll see about fifty more apps available to download. They appear on screen in order of importance, as decided by Xerox, but you can reorder them yourself.

The touchscreen is not perfect. It’s surprisingly sensitive, almost too sensitive, but also slow, which makes it easy to make a miss-step. Also, some of the apps on the app gallery are expensive at $99 for an annual subscription, and others just don’t work. The QR Code app, for instance, simply generates a QR Code that should make it easier to link your phone via the app, except we only managed to get error messages. Why not just have a sticker?

The Xerox VersaLink C400DN prints fairly promptly from sleep mode (around 13 seconds for a colour page and 12 for black-and-white) and quite quietly. There is, however, noticeable fan noise in between printing and the fan tends to start up randomly, even while the printer is sleeping. Consecutive pages print quickly too, with the quoted speed of 23ppm for duplex printing being about right by our measurements.

Pages of text emerge looking pleasingly crisp and consistent. Every character appears well delineated and clearly legible even at the smallest point sizes. Take a magnifying glass and you’ll see that there’s no running or smudging, although there is some loss of definition. Black and white photographs also print very well thanks to its 256 available shades of grey.

Colour documents also look even better because the Xerox VersaLink C400DN has a particularly bright and vivid palette with colours approved by Pantone. This works very with colourful charts and presentations, but less well with photographs, which tend to look overly bright and unrealistic. The shading of black and white images looks noticeably smoother than its colour shading, which shows conspicuous banding.

For a print-only device, the Xerox VersaLink C400DN is rather expensive and its long list of features will be considered overkill for the small office. In the long run, however, your print costs will be low thanks to the generous amount of toner included and reasonably cost of replacement cartridges. If you print a lot, or there are several people in the workgroup, the Xerox VersaLink C400DN justifies its bulk and its initial cost with its vivid and reliable print quality.