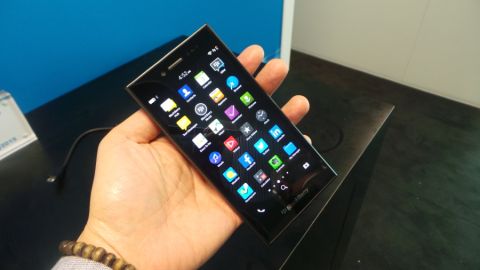 The BlackBerry Leap is affordable, but not cheap. It looks expensive and sports a smart design and good battery life, but the processor is an oddity. Overall, it's a solid, rather impressive piece of kit.

BlackBerry didn't take any chances with the Leap, in terms of attempting to recapture the hip and cool audience of young professionals – and it might just work.

This smartphone looks a lot like the Z10 externally, but internally, they're practically twins. On the outside, the Leap feels sturdy and solid, with its textured curved back enhancing grip, not to mention adding character to a product which is aimed at an audience which craves just that.

It's just about the right thickness and comfortably fit in my palm despite its dimensions (144 x 73 x 9.5mm). The rest is pretty much what you'd expect from an entry-level smartphone aspiring to be a mid-tier model. Still, it carries a recommended price of $279 (about £180, AU$360) but will very likely sell for much less than that at launch.

An 8-megapixel rear camera is paired with a 2-megapixel front-facing snapper, and full HD video recording is possible. The Leap has a 5-inch 720p display, and a microSD card reader plus a SIM slot on one side, with a microUSB port on the bottom. 802.11n Wi-Fi (dual-band) is on board, and Bluetooth 4.0, but there's no NFC.

Inside resides a 2,800mAh battery that can power the phone for up to 25 hours according to BlackBerry.

The headset jack and the power button are located on the top, while the volume up/down and mute buttons are on the right-hand side (when looking at the screen).

The BlackBerry Leap sports 2GB of RAM, 16GB of on-board storage and as strange as it sounds, a three-year-old processor – the MSM8960 – last seen in the BlackBerry Q10 and the Z10.

While the first two elements are perfectly adequate for an entry-level phone, the presence of the MSM8960, even if clocked at 1.5GHz, comes as a surprise.

That said, it is a former top of the range System-on-Chip which powered the likes of the Galaxy S3, the Nokia Lumia 820 and the Motorola Droid Razr M. And indeed, it should outscore competing SoCs even after three years on computational and graphics-oriented tasks thanks to its Adreno 225 GPU.

The screen looks great and the Leap proved to be very responsive during my brief interaction with it.

As expected, the Leap runs BlackBerry 10.3.1 which offers, amongst other things, a virtual keyboard. You also get both BlackBerry's own app store, World, as well as Amazon's store plus a raft of apps like Blend, Assistant and Hub.

The Leap is probably the best shot BlackBerry has to stabilise or even improve its ever-shrinking market share. For the price, you get some decent hardware – 2GB is unheard of in the sub-£200 price bracket, even for Android smartphones. BlackBerry said that users shouldn't be concerned about the number of cores the processor has or its clock speed, and I tend to agree. Unfortunately, the market is likely to judge the phone based on those two variables.