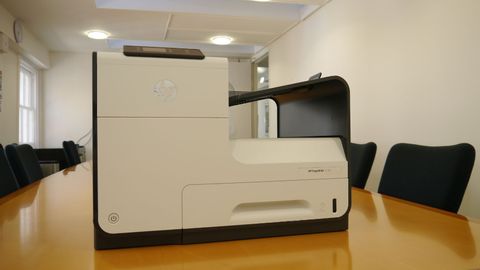 HP's printer is an impressive all-rounder and a good option for businesses, although alternative devices in its price range may be more suitable in some cases.

It's hard to believe that HP's PageWide technology is four-years-old already. The new print head – which as its name implies covers the whole width of a page – helped HP grab the world record for the fastest desktop printer.

The Officejet Pro X576dw (and its predecessor, the X551dw) managed to print a whopping 70 colour pages per minute when clocked by Guinness World Records, which is faster than most, if not all competing laser printers on the market, including HP's own.

Fast forward to 2016 and the technology is mature enough for HP to introduce it to a mainstream audience. Enter the PageWide 352dw which loses the Officejet Pro moniker and prints just 30 pages per minute, but also costs less than half the price of its 70ppm bigger brothers.

(Note that our review sample of this printer was provided by online retailer eBuyer where it costs £169 – around $220, AU$295 – a price including delivery.)

Compared to the Aficio printer, this one is an altogether different beast with a rated colour/black print speed of 30 pages per minute. HP claims that the first page can be out in as little as seven seconds.

What makes this printer faster than most colour laser printers in this price range is a combination of a vast amount of memory (512MB) and HP's PageWide tech, the aforementioned fixed print bar that improves reliability and has fewer moving parts.

It is massive, heavy, and is more of a workgroup printer than a desktop one (unless you have a massive desk). At more than 16kg, it is transportable but definitely not mobile and occupies a footprint slightly smaller than two A3 sheets stuck together.

Note that there are no USB cables bundled. You will have to use an existing cable or buy a new one if you decide to avoid using wireless connectivity.

The printer is backed by a one-year onsite warranty which removes the hassle of having to deal with packing and sending back the device should you hit a snag (or if you no longer have the original box).

Take it out of the box, plug the power cable in and you're ready to go. Well, almost. After plugging in the cartridges (which look like no other inkjet consumables you have seen before – check out the above image), you will have to go through the initial setup process which altogether took more than 20 minutes.

That includes spewing out a few test pages, entering the SSID and password for your network and setting the time. Nothing mind-boggling, but try doing that on a tiny screen (50mm diagonal) with only two control buttons (left and right) and it quickly becomes a pain.

We suspect that the printer comes with a starter kit as the update sheet showed that it had around 1,200 pages remaining, around a third of what was expected.

Other than USB and wireless connectivity (including Wi-Fi Direct), the 352dw also offers Ethernet, USB host compatibility and a number of printing options (ePrint, AirPrint, Cloud Print and NFC touch-to-print).

One of the reasons why HP engineers chose to make this printer so imposing is because of its paper handling capabilities. It uses the same chassis as its faster siblings which forced some design decisions especially when it came to opting for a generous output tray.

The 352dw has a 500-sheet input tray (which can be doubled), and a maximum output capacity of up to 300 sheets, plus automatic duplex printing.

HP also quotes superior power consumption as being one of the reasons why its offerings are better than their laser counterparts. HP quotes an average printing power consumption of 70W, dropping down to just under 10W when in 'ready' mode and half that in sleep mode.

When it comes to printing, it is a solid performer. We printed an 18-page document (single side, colour text and graphics, PDF format) in 70 seconds which translates to a speed of nearly 17 pages per minute.

That included a 23-second spooling time with the first page out 10 seconds later. Excluding the processing time, the 352dw printed 18 pages in 40 seconds or 27 pages per minute. That's closer to what we expected from it.

We printed out copies on 80gsm paper to reflect the business focus of the device which produced respectable results. The ink dried quickly despite the rapid churn and it performed well on the dreaded solid background test. Even size 5 text was clearly readable on a solid blue background (see the image below).

The 352dw is a decent all-rounder with excellent print speeds and features along with above average printing capabilities. Clearly, this is no photo-printer but it is more than adequate for most business printing jobs.

At £169 (around $220, AU$295), it is keenly priced for a non-MFP device that offers colour capabilities and functionalities usually found on more expensive printers. But is it the best printer of its category?

It's probably one of the better ones out there but then its bigger brother, the PageWide Pro 452dw is an even better option as it costs £165 (around $216, AU$290) at the time of writing (including a time-limited cashback of £80) and offers almost twice the printing speed, better management options, but a lower resolution.

Others may also consider a multifunction version of the 352dw (which is the 377dw) or the 477dw. The latter, despite being the more enticing alternative, is actually cheaper at £227 (around $300, AU$400) after an £80 cashback, and even better suited for workgroups.