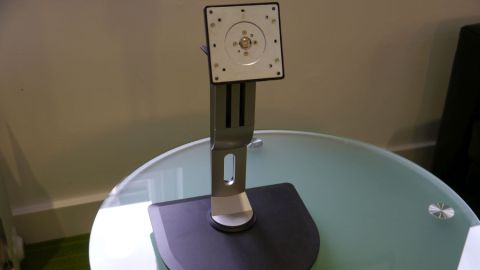 There are niggles here, such as the space the stand takes up and flaws with laptop charging, but there can be no argument that this Philips stand represents excellent value for money.

As the laptop leapfrogs its desktop cousin to become, for many, the main (and often only) work computing device, it is not surprising to see that docking stations are becoming more popular as well.

Factor in the unstoppable, relentless drive towards thinner devices with fewer connectivity options (like the new MacBook), and you have the perfect conditions to transform docking stations into more powerful peripherals.

With that in mind, we got the Philips SB4B1928UB in for a spin. It is a monitor stand but with a big difference – it actually incorporates a fully-fledged docking station and a laptop battery charger, although that particularly useful feature is not even listed online.

Out of the (massive) box, the SB4B1928UB looks like any other monitor stand except that it has a huge base that's about 30cm in diameter. That may exclude it, de facto, from some working environments where desk surface space is at a premium.

The base is made of anthracite plastic which the silver-coloured column towers over, with an oblong hole near to its foot for cable management.

It comes already assembled which is nice; as it is pitched as a universal docking station, it won't be a surprise to see that its VESA adaptor will fit all VESA-equipped monitors smaller than 28-inch, not just Philips' ones. It even comes with the screws!

As expected, the height is adjustable thanks to a simple lever mechanism and you can not only tilt but also swivel and rotate the monitor base within seconds.

The whole thing feels sturdy and solid and adding a 28-inch monitor took just a few minutes with the right screwdriver.

The SB4B1928UB comes with a number of cables and power adaptors but, frustratingly, no power cord. You can use any standard clover-leaf/Mickey Mouse cables though as the power supply unit is integrated in the base (which partly explains why it is so big).

The rear of the device contains two flat USB 3.0 ports (including one that can charge when off), one square USB port to connect to your laptop, an HDMI connector, a 10/100 LAN port, a power connector, and a full size DisplayPort connector.

There's an extra pair of USB 3.0 ports on the sides, plus two audio connectors and an SD card slot. No lights or other connectors are present on the left hand side of the SB4B1928UB, while the front simply hosts a single status LED.

The 3.4kg USB docking stand connects to your laptop via a standard USB 3.0 port which should provide a decent amount of bandwidth. As expected, you will need to install the appropriate DisplayLink driver to get the product working (you don't need to run the bundled DVD). Once you're up and running, you can connect up to six monitors (DP, HDMI and four USB monitors) although overall performance is likely to take a big dip.

I did notice a slight lag moving from DP to DP-over-DisplayLink for 4K; the lag was annoying enough for me to move back to my original setup.

You can also use it to power your laptop – a very useful feature – although you will need to have a compatible device for it (19.5v, 3.42A). Note that the stand comes with a number of connectors to cater for most of the laptops on the market.

However, when I tried to connect my Dell XPS 13 (2015 edition), I was confronted with a warning message which I chose to ignore. The result was that my laptop would neither charge or discharge.

Tinkerers might find a solution in the laptop's BIOS but for the rest of us, this is an impractical solution that sadly renders one of the more useful features of this peripheral almost useless.

With an RRP of £128 (around $200, or AU$280), the docking station, which has yet to be stocked in the UK, is exceptional value for money, regardless of whether or not you use it with a 4K monitor.

Less elegant docking stations – many of which require an external power supply unit and do not charge laptops – often cost way more.

In the best case scenario, you only need to connect two cables (USB 3.0 and power) to get your laptop running, but at least you won't need your power supply unit.

Ultimately, future iterations of this product will show their full potential by adopting the USB 3.1 Type-C connector.

This port – which has been popularised by Apple via its 2015 MacBook – has the potential to deliver both power and data using one single cable, finally making good on one of the pipe dreams of the modern office desktop; one connection to rule them all.

For the rest, I would like to see a smaller base as the current one eats up a lot of desk space. It could also benefit from better cable management, and having the ports on top of the base rather than at the back. The current setup adds about 10cm at the back of the base, making access to the ports tricky.