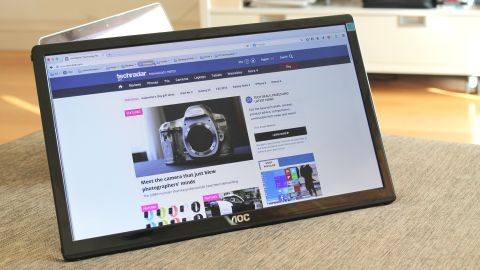 The E1759FWU is an affordable and portable USB monitor suitable for watching video and consuming web content. However, its poor colour saturation, awful viewing angles and input lag severely limit its appeal.

While laptops, tablets and other devices become thinner and lighter, monitors are having some trouble shedding the pounds.

But despite recent trends such as 4K laptops and tablets with larger displays, dual-monitor setups remain as popular as ever. If you're after a second screen to lend your laptop extra screen real-estate on the move, a USB monitor like the AOC E1759FWU may fit the bill.

Available for around £108 (US$199, around AUS$256) from online retailers, the 17-inch monitor can be had for roughly the cost of a top-end 22-inch full-HD widescreen monitor. The E1759FWU tops out with a pixel-resolution of 1440 x 900, so for that reason (and a few others too) it's not the best option if you're going to be rooted to your desk.

It wasn't so long ago that USB monitors were rare, and while they haven't exactly flooded the market there is a wider choice than before. While we're yet to test it, the 15.6-inch Asus MB168B will be used for the purposes of comparison due to its similar pricing (£122 from online retailers) and features.

Weighing 2kg, the E1759FWU can be picked up with a single hand and slips into its velvet carry case like a glove for easy transportation. It's not nearly as light as the Asus model (798 grams), but it's still a backpack-friendly option.

Its bezel is made of a shiny, glossy black plastic that positions the AOC logo along the centre of the bottom edge. It's an absolute fingerprint magnet, but smudges can be easily wiped away with a soft cloth.

The E1759FWU is slightly larger than the Asus model and sports a higher resolution, which may be a crucial factor if you used to snapping websites or documents of a certain size side-by-side. Both monitors connect using a single USB cable that transmit power and data.

At the back of the monitor is an adjustable stand that folds in or out. You can't rotate it, but it's easy to position (even in portrait mode) and doesn't slip or wobble once in position.

The USB cable slots into the side of the monitor around the back. There's no cable tidy, but I had no trouble positioning the cable in a way that didn't get it tangled up.

On paper the AOC E1759FWU seems like a good deal thanks to its large size, HD resolution and simple but effective design. Unfortunately it falls down when it comes to the crunch because of its washed-out colours and awful viewing angles. While images and text are sharp and legible enough, there is no "punch" of any sort to the picture.

Interacting with the desktop on the E1759FWU just isn't a pleasant experience. We tested the model on a Mac running OS X Yosemite and found that because colour saturation was so poor, using apps with brigh colour schemes and UIs - such as Google Spreadsheets or Evernote 5.6 - became a painful challenge. The E1759FWU has no contrast or brightness controls, so you're effectively stuck with it.

Though it's clearly not much of a fair fight, I placed the E1759FWU next to Apple's MacBook Pro with Retina's IPS display for comparison, something that only served to accentuate the big difference in colour saturation between the two panels. Make no bones about it: the E1759FWU looks worse than the average entry-level 17-inch TN monitor (if you can find one that is).

Equal to its poor image quality quality, the E1759FWU suffered from slight but very noticable lag that couldn't be shaken off whether using Windows or OS X, tested with the latest DisplayLink driver v7.7 M3.

The only upshot of its two main flaws is that neither are a huge problem when watching videos. A YouTube video played at both 1080p and 720p was enjoyable enough to watch face-on.

The E1759FWU is affordable for a 17-inch USB monitor with a 1440 x 900 pixel-resolution. It's easy to setup, produces sharp (but not bold) images and is portable enough to carry around. Unfortunately its appeal is seriously hampered by its washed-out colours and off-putting levels of input lag.

That won't be a problem if you're carrying out basic tasks like dragging windows onto the desktop or watching videos, but it will prevent you from undertaking faster and more complex tasks with any sort of precision.

If you're seeking a low-cost, high-resolution USB monitor for reading websites or viewing video content head-on, the E1759FWU is up to the task. However, for spreadsheet work or tasks that require constant or fast interaction (or accurate colour reproduction), its flaws are such that it can't be recommend.