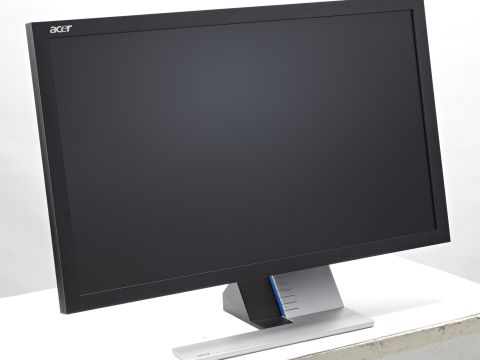 Is this good enough in the face of the 27-inch competition?

You usually get what you pay for with a PC monitor. In terms of the chassis and stand design of budget screens, that means cheap plastics, flimsy stands and anonymous looks. Not so with the Acer S273HL. Some serious cash has been invested in the hardware.

For starters, Acer has migrated much of the electronics from the chassis to the base of the stand. That includes all the ports as well as the control buttons for the on-screen menu. Overall, the design is crisp, geometric and original. It also feels nicely knocked together.

What you don't get, however, is any practical benefit from this attention to detail. The stand remains a tilt-only affair. Height, swivel and rotate adjustments are not on offer. Similarly absent is a DVI port. Instead, you get a pair of HDMI sockets and VGA connectivity.

In theory, that's fine. You can use a simple HDMI to DVI adapter should your PC lack an HDMI port. In practice, compatibility can be an issue. Admittedly, S273HL works fine after a little tweaking. But we'd still prefer to see a DVI port on what is unambiguously a PC monitor.

As for image quality, the combination of LED backlight and TN panel delivers punchy overall visuals with reasonably vibrant colours. The panel doesn't suffer from edge bleed and offers decent blacks along with adequate viewing angles.

With no shortage of budget panels on the market, it's nice to have the option of something slightly more upscale without taking a really big step up to a truly high end monitor. The S273HL's novel chassis and stand design certainly helps it stand out from the norm. The LED backlight is also a welcome feature.

At this price point we want more than just a nice stand and some funky buttons. We want something extra in terms of image quality. Despite its LED backlight, the Acer doesn't deliver. It's not a bad monitor, but for visuals, it's little or no better than the likes of Iiyama's much cheaper E2710HDS.